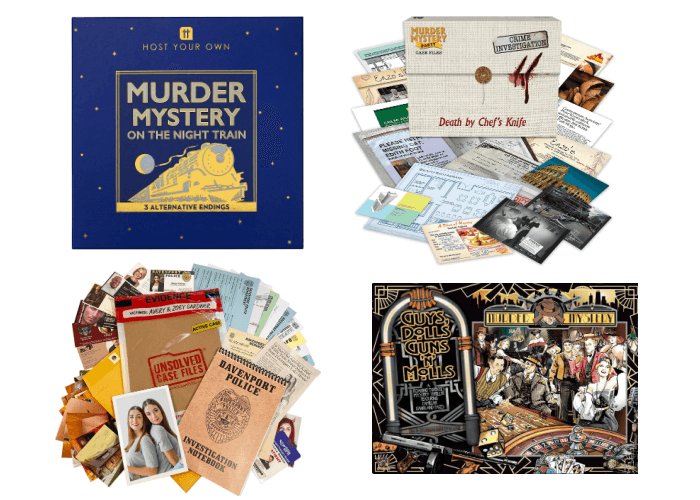 There’s something special about solving a murder. It’s the perfect mix of detective work, intuition, and luck. And what better way to test your skills than with a board game?

Murder mystery board games are the perfect way to enjoy an evening with friends or family. These games require you to use deductive reasoning to uncover clues, question suspects, and ultimately solve crimes. They’re usually easy to learn and provide hours of entertainment.

The classic Murder Mystery game everyone thinks of is the game Cluedo, however we have searched the stores for games like Cluedo and ones that bring that Murder Mystery feeling!

Here are some of the best murder mystery board games available: 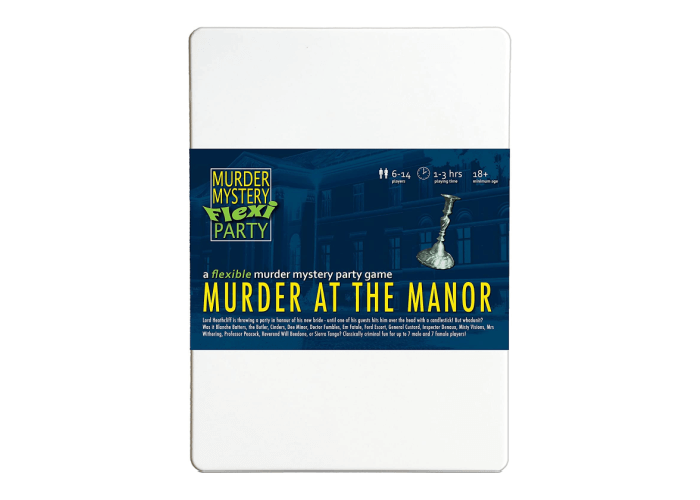 1. Murder at the Manor

Murder at the Manor is a game for 6-14 players. In this game, you and your friends are all suspects in a murder mystery. The game is set in a haunted manor, and you must use your detective skills to figure out who committed the crime. The game has everything you need to play, including the manor board, character cards, and clue cards.

The game requires each player to choose a character card and place it in front of them. Then, the manor board is placed in the centre of the table, and the players take turns rolling the dice and moving their pieces around the board. The goal is to collect clues and solve the mystery before anyone else. Clue cards can be collected by landing on specific spaces on the board or correctly answering trivia questions about the murder victim.

The game ends when someone collects their fourth clue card or when someone solves the mystery. The winner is the player who solves the murder first. Murder at the Manor is a fun and suspenseful game that keeps you guessing until the end. 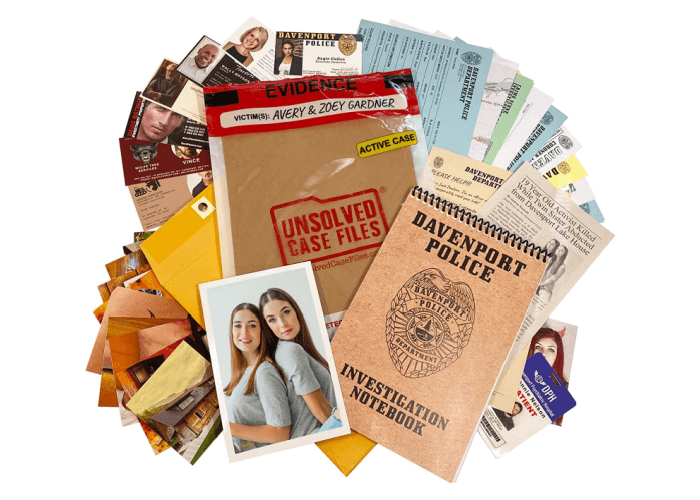 Now on a personal level I can say this one was PHENOMENAL!  I purchased this set and it was definitely a focus point for a good while.

This is an investigative board game that simulates a real-life detective case. Players are assigned different roles in the game, such as detectives, crime scene investigators, and forensic scientists. They must work together to solve the case by collecting evidence, interviewing suspects, and solving puzzles.

The best part of this game is the satisfaction of solving the puzzles. The game is full of exciting twists and turns, and it’s never quite clear who the perpetrator is until the end. This makes for an exciting and suspenseful gameplay experience. The graphics are also well done, making the game visually appealing. Every aspect of this really makes you feel truly immersed in the case.

Overall, the unsolved case files game is very challenging, but it’s also gratifying. It’s an excellent game for friends or family who enjoy playing detective and solving crimes. If you fancy yourself a bit of a mystery solving whizz, you can even try to tackle this solo! 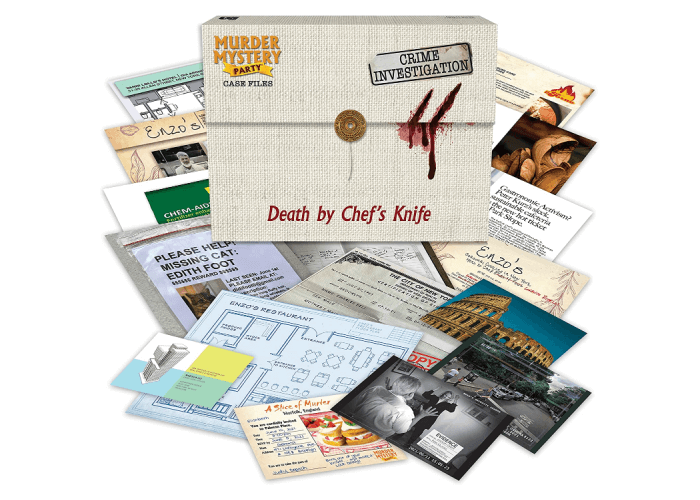 The University Games Murder Mystery Case File a Chef’s Knife is a riveting game that will have players on the edge of their seats. The game is recommended for ages ten and up and can be played by 2-6 players. In this game, players are tasked with solving a murder mystery. The victim is a chef, and the weapon is a chef’s knife.

The game comes with a booklet containing all the clues players will need to solve the mystery. There is also a map of the crime scene and a list of suspects. The suspects include the victim’s family, friends, and co-workers. Players must use their detective skills to figure out who killed the chef and why.

To begin the game, the players must first read the case file. It contains all the information the players will need to solve the mystery. The file includes a list of suspects, a list of weapons, and a map of the crime scene. The players must then divide up the evidence cards evenly among themselves.

Each player must then assume the role of one of the suspects in the murder mystery. The players then take turns asking each other questions to gather clues about the murder. The goal is to determine which suspect committed the murder, which weapon was used to make the kill and where the murder occurred. The best part about this game is you can pass it on to a friend when you’re done and watch them try and work through the same case, maybe giving them some hints…. if you’re feeling generous!

Imposter! The After-Dinner Mystery Game is the perfect way to end an evening with friends. The game is played much like a traditional murder mystery game, but with a bluffing element added.

The game can be played with any number of players, and it is best suited for groups of 4-10 people. Those with a good eye for group interactions and those who can pick up on subtle body languages will thrive in this game! Conspire to win or collaborate to flush out the victim, the strategies you can come up with are always just as fun and unique as the game itself! 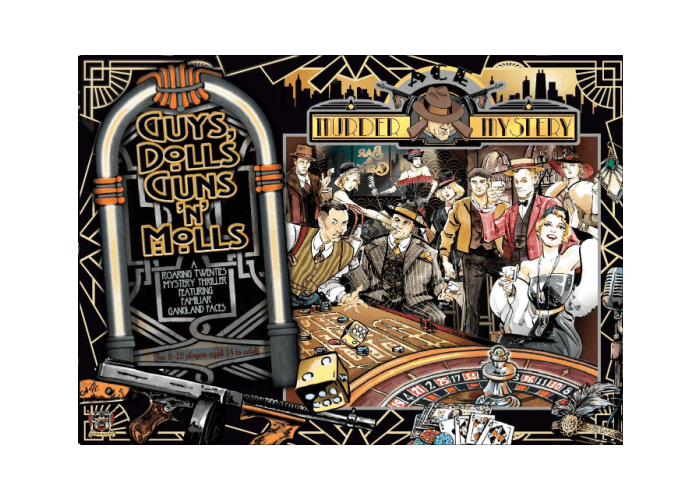 Ace Mafia is a classic murder mystery dinner party game that takes players back to the 1920s. The participants can dress up as The Great Gatsby, Molly Mollone, Al Capone, Bonnie & Clyde, etc. and must work together to resolve the murder.

The game is split into two parts – the first is a social part where players chat and get to know each other, and the second is when the murder takes place and players must work together to solve it. There are excellent plots/scripts included that make the game truly unique and exciting.

The game is suitable for 8-12 players and can be played in 2-3 hours with breaks. It’s great for any occasion and offers hours of entertainment. This one is for the more hardcore dinner party goes. Although it can be a long game, it really does give you the opportunity to get in to character and you can even go the extra mile by making the event a costume party! With the entire game taking place in fancy dress, the time limit will be over before you even know it. 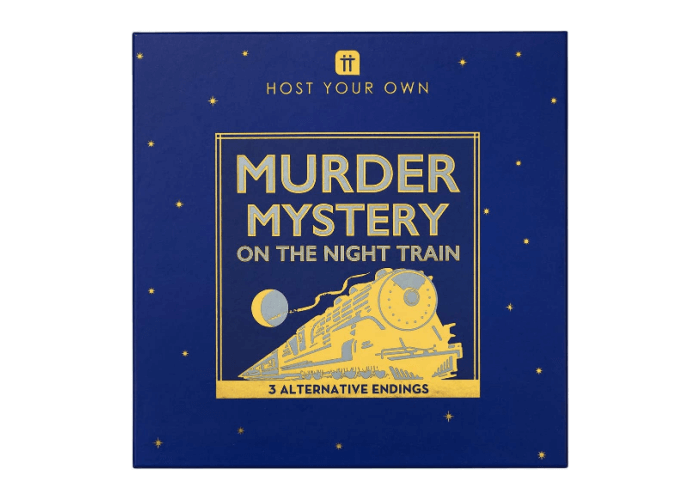 You can almost smell the diesel fumes and feel the sway of the train as it travels through Europe in this interactive Murder Mystery game from Talking Tables. From the comfort of your own home, you and your guests can take on the roles of passengers on board the European Belle, trying to solve a dangerous deed that has taken place.

The kit comes with everything needed for the game, including character instructions, a victim, and three different endings. This game is perfect for groups of friends or family who want to get together and have some fun. The game can be played with 4-8 players and takes 2-3 hours to complete. A much more relaxed take on our No.5 game, but still a fantastic game to play with a much smaller group and maybe a less intense setting. A casual take on the same idea and a whole lot of fun!