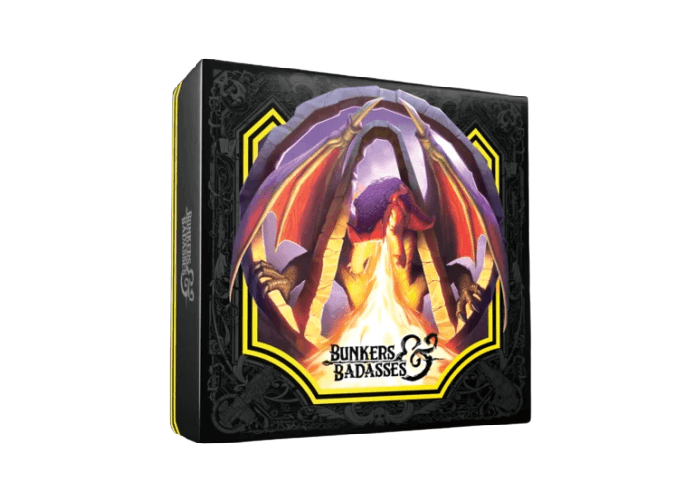 Dungeons and Dragons (D&D) is the original tabletop role-playing game that grew in popularity every year. Since they published the first game, it spawned countless versions and extended the reach of tabletop board games.

Today, you can find crossover adventures that bring together the worlds of cyberpunk, magic, science fiction and fantasy. So, are you in search of board games like Dungeons and Dragons?

Authored by Chris Pramas, Dragon Age RPG is typically based on Dragon Age video games developed by BioWare. Adapted from Dragon Age: Origins, the role-playing game takes players back to its dark roots. Basically, it brings the excitement of the Dragon Age-rich fantasy world to the tabletop.

The RPG features the original game system that’s easy to learn and play. It also has a stunt system that keeps spellcasting and combat exciting. So, if you’re ready to enter the gripping world of villainous rivals and heroes, then gather your friends, grab some dice and start rolling.

Based off of the “Dragon Age” video game series, this game takes inspiration from the franchise and delivers this beautiful board game!

Bunkers & Badasses is a tabletop game with a streamlined ruleset and a focus on the action of blasting your enemies. There are four base stats and they include Mastery, Speed, Accuracy and Dama. It also has six skills namely: Traverse, Search, Sneak, Insight, Talk and Interact.

Players have access to several weapons that they can dream up. There are 100 gun cards plus blank cards which you can create your own. All the movement in the game is set in squares with no conversion table.

Originally created by Mark Rein-Hagen, World of Darkness is a tabletop role-playing game full of supernatural and horror hidden in plain sight. The game features werewolves, vampires and other creatures that live in the shadow.

The player assumes the character of a monster pretending to be human and then fights for supremacy and survival in the dark world. In the quest for power, players will leverage their assets from street smarts and seduction to diplomacy and arcane abilities. The horror is personal, but you’re not the victim. Instead, you’re the antihero afraid of giving in to your inner conflicts.

4. Risus: The Anything RPG

Risus: The Anything RPG is a family-friendly game where the characters are typically defined by cliches. These cliches are commonly used just like skills and attributes are usually used in other games. This pen and paper roleplaying game allows players to choose cliches like those of your character. Or you can devise something like Bruce Lee, a character who does KungFu stuff and others.

You can also choose contemporary cliches such as computer nerd, biker or supermodel. Thanks to the use of cliches, the game is fun and hilarious to play. Players can create characters in minutes instead of hours. When a player rolls the dice, the number of rolls corresponds to the skill of a supermodel, biker or fighter.

Basically, six dice is mastery, three dice is professional, and one die is a putz. The game comes with built-in campaigns to play until the players create their own.

Set in 2077 when the storm of a nuclear war destroyed the world, Fallout: The Roleplaying Game welcomes you to the wasteland. Your mission is to join a plucky band of survivors to fight and shape the new civilization.

You can choose to team up with pre-existing factions such as the super mutants or the Brotherhood of Steel. The choice is yours, and so are the consequences. The game allows you to create your own ghouls, super mutants and even robots. You’ve access to an extensive catalogue of characters and creatures from the world of Fallout. To power your incredible wasteland wanderers, use Action Points.

The 13th Age is a tabletop fantasy game similar to Pathfinder and D&D 3.0/3.5. The game makes use of features and mechanics to develop the story and characters as you play. It’s level-based with ten levels grouped into three tiers. Instead of miniatures or a grid, the game uses abstract positioning and distances.

In the game, adventurers seek their fortunes in the Dragon Empire where Icons pursue the goals of preserving the empire from chaos. Players can choose the Icons to ally with and those to oppose. The use of the Icon system keeps players on their toes and provides an opportunity to alter the plot in new and interesting ways.

If you’ve played fantasy RPGs before, then you’ll have some familiarity with the classes. There are lots of rules, but they’re left up to the players and Grand Master. This helps ensure the game remains flexible.

Pathfinder 2E is a skill-based game that introduces you to the world of fantasy adventure. Players can choose from characters such as goblins, humans and elves. They can also create heroes who can become legends.

Pathfinder originally came about because D&D 3.5e was deemed to be such a fan favourite it gave birth to the “PathFinder” game!

Once you create your characters, you can take the role of a scholar, explorer or adventurer employed by the Pathfinder Society. As you explore the fantasy world, win fights and complete challenges, you earn experience points. After you earn 1,000 experience points, you level up. This makes your character more powerful in many ways.

The game has several standalone adventures that provide hours of entertainment. It also has a Game Master that runs the Pathfinder game.

Set in a future where fantasy creatures, magic and cybernetics exist, Shadowrun is one of the many variations of D&D. First published in 1989, the game combines fantasy and cyberpunk to create a dystopian world. In this world, mega-corporations control everything. It’s also a world where technology is far advanced beyond our understanding.

The game provides hours of adventure and excitement on the mean streets of the world giving players a chance to show what they’ve got. With a simplified ruleset and more, the game has everything players need to dive into a fantasy-infused adventure.

Another role-playing game based on an over-stylized dystopian future is Cyberpunk 2020. The game welcomes you to a dark future where mega-corporations control the world from their fortresses. They enforce their rules with their armies of cyborg assassins.

The main location of the game is the fictional Night City located on the west coast of the United States. With a population of 1 million people, Night City is a stratified society of political machinations and gang warfare.

The game includes everything to tackle the world of corporate assassins and mega-corporations. It provides hours of entertainment thanks to the intense urban action and realistic playability.

FUN FACT: Cyberpunk 2077 is based off of the board game and it currently has a kickstarter to make toe 2077 version in to a tabletop version!

Enjoy thrilling adventures of the Star Wars Universe with the Star Wars Roleplaying game. It consists of standalone cross-compatible games each with its own separate experience. As a player, you can take the role of a princess who turns out to be a general or a smuggler who flies across the Star Wars universe.

The Star Wars Roleplaying core rulebook is typically based on the d20 system used in third edition D&D.

You’ve one player who is the gamemaster and in charge of the world, while other players take the role of a character who has various skills and equipment. Additionally, you and your friends can take part in a variety of missions, including the cause for galactic freedom.

Published by Chaosium, Call of Cthulhu is a horror fiction RPG based on a story of the same name by H.P Lovecraft. First released in 1981, the game is in its 7th edition and based on Chaosium’s basic roleplaying.

Set in a darker version of our world, Call of Cthulhu is skill based with characters getting better with their skill as the game advances. The game does not use levels, but it uses percentile dice to determine success or failure. Basically, it uses percentile dice, and a two 10-sided die to resolve the rolls. This is unlike the single d20 used with D&D.

Gather your fellowship and embark on an epic quest in Quests Of Yore. This immersive role-playing game takes you across the lands of old where you uncover mysteries. Quest Masters will lead the adventurers across Clovendell where players will face off unknown dangers.

The game features folk and lore from Pixar’s hit movie Onward. As such, you’ll meet cyclops, dragons, elves, goblins and even the Manticore. These are just some of the characters awaiting you on your quest in Quests Of Yore.

You can play as one of the characters or bring your own into the role-playing game that covers 13 quests. To get started, have your character sheet ready, build your character and join the quest.