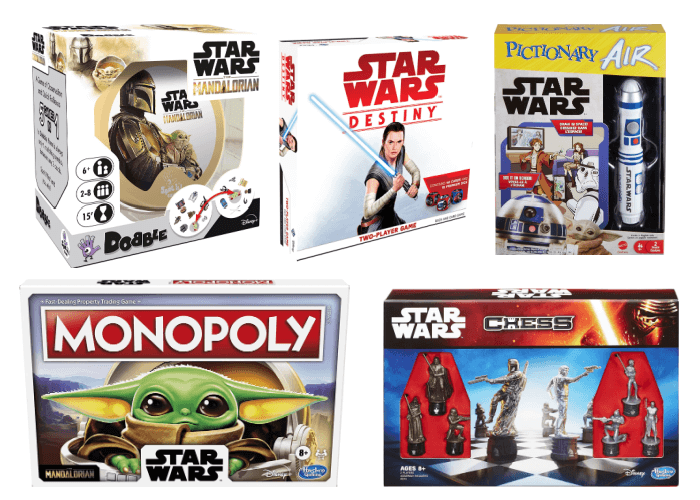 Star Wars is one of the most popular fantasy universes. Set in space, it’s built on a great story that pits two sides – Jedi and Sith, the Galactic Empire and the Rebel Alliance.

If you’re a fan of Star Wars films and TV shows, then you can relive the many dramatic moments of the saga on Star Wars Board Games. From monopoly to chess, the Star Wars-themed games bring families together for a fun and exciting game night.

Here are the best Star Wars Board Games that we could find, so read on and may the force be with you. 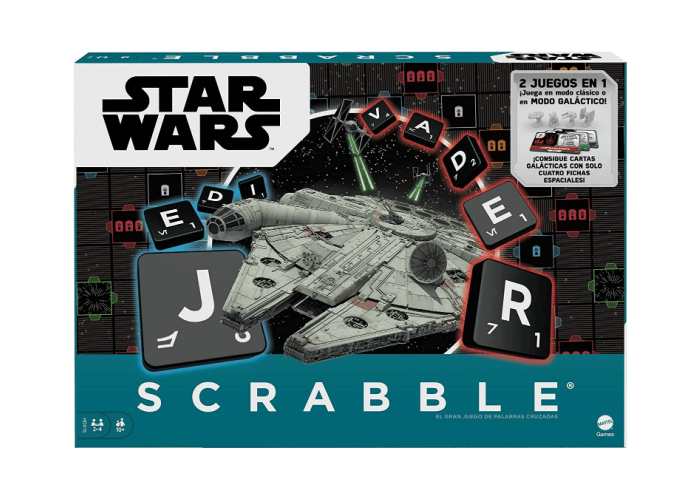 The board is decorated with fantastic artwork and the box also sports some beautiful images, perfect to get you in the Star Wars mood.

The game comes with a cool gaming board and tiles, where players can play either the classic scrabble game or Star Wars scrabble. Players can play tiles from their racks to form crossword-style words. With the words you build, you move one of the iconic starship tokens. A great home rule for this game is to allow words that are included in the Star Wars Universe or even give bonus points for using them! Push your knowledge limits, you are the biggest Star Wars fan, search your heart you KNOW it to be true! 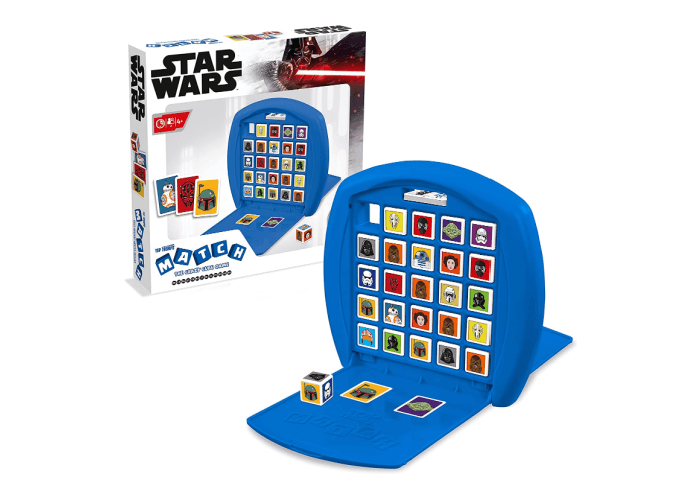 To play the game, players need to match 5 cubes in a line. They can match the cubes diagonally, vertically or horizontally. Once you match the 5 cubes, you score points. To get started, the first player will push out the top left cube. Then Player 2 will use that cube to push out and replace another cube in the grid.

From then on, the players will take turns to push out the cubes until the first player matches a line of five cubes. The first to do so becomes the winner. 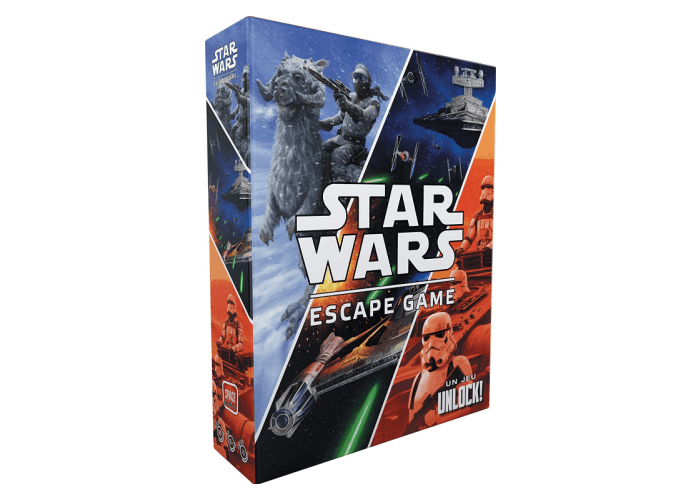 Experience three epic escape adventures in Unlock! Star Wars The Escape Game. Powered by the Unlock game system, the game has real-life escape room challenges. These challenges provide the same thrill and experience as a classic escape room without ever setting foot outdoors.

There are three intergalactic adventures:

Players have 60 minutes to complete each intergalactic adventure. They can do so using ships, weapons, combine items, search locations and even interact with droids.

You will need to keep your wits about you in order to solve puzzles, riddles and find the answers to progress through your escape through intricate and challenging escape scenarios! 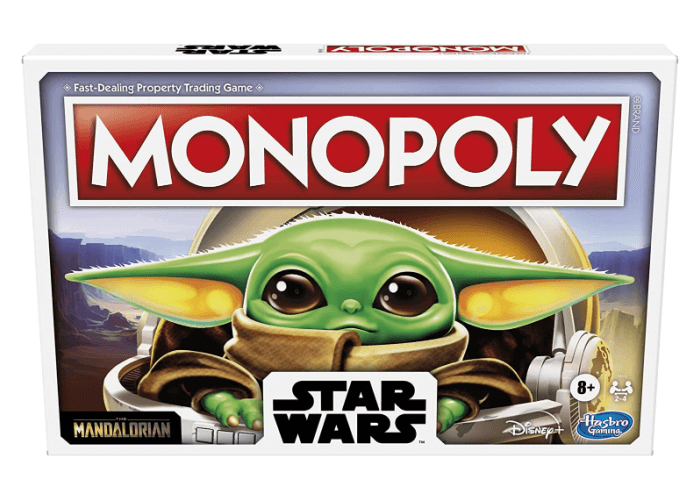 The themed game board features different places and objects that fans of the TV series will recognize. They include Razor Crest Cockpit, Tracking FOB, a Frog, a Cup of Broth and the Razor Crest Storage Bay. As a player, you’ll travel around the game board, buying, selling and trading objects. The last player with more money and properties wins. 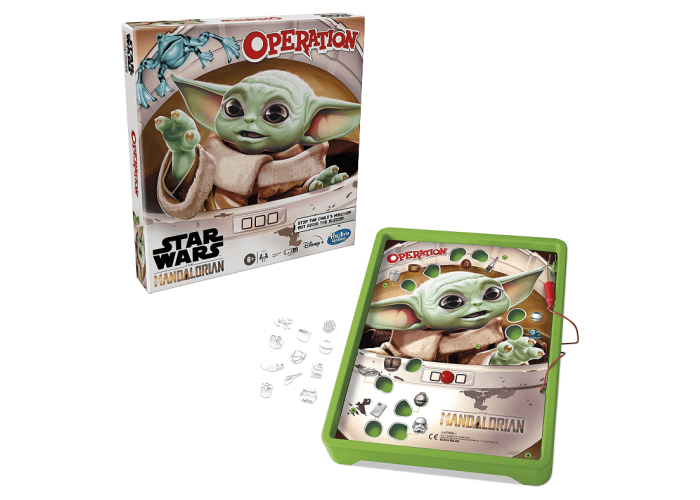 Another board game inspired by the Mandalorian TV series is Star Wars The Mandalorian Operation. In this edition, players reimagine scenes from the live-action TV show. The aim of the game is to stop the character called Grogu A.K.A  “Baby Yoda” mischief while avoiding the buzzer.

You must find all the objects that the character “Baby Yoda” took including a cup of broth, a mudhord egg and a frog. Using the tweezers, players will try to remove the pieces from the game unit without setting off the buzzer. The player with the most pieces wins the game.

Clear your mind, concentrate and succede you will. 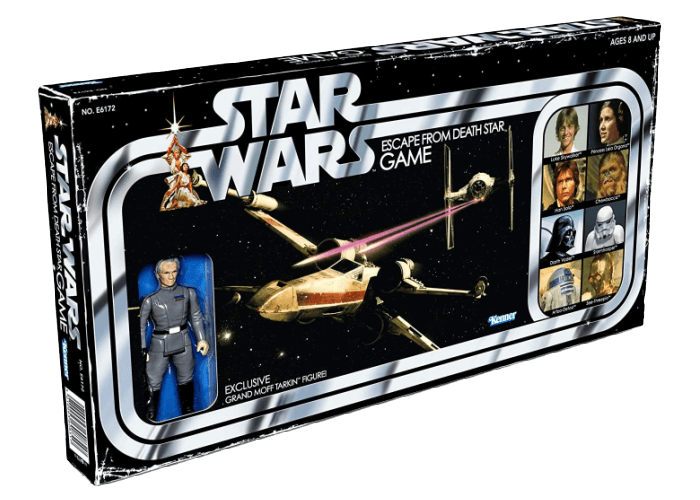 The Star Wars Escape From Death Star Board Game is a retro game based on the original board game released in 1977. It includes a game board, 8 cardboard movers, 4 Death Star blueprint cards, 4 tractor beam cars, a spinner, and a deck of 52 force cards. You’ll also find an exclusive retro Grand Moff Tarkin action figure.

Ideal for young Star Wars fans, players get to relive Star Wars moments as they help their favourite characters escape the Death Star. In the game, players will help Princess Leia, Han Solo and others work their way to the Rebel Base after escaping the Death Star trash compactor.

Each player must choose their colour and then race around the Death Star with two movers. One of the movers features Luke Skywalker and Princess Leia while the other has Han Solo and Chewbacca. 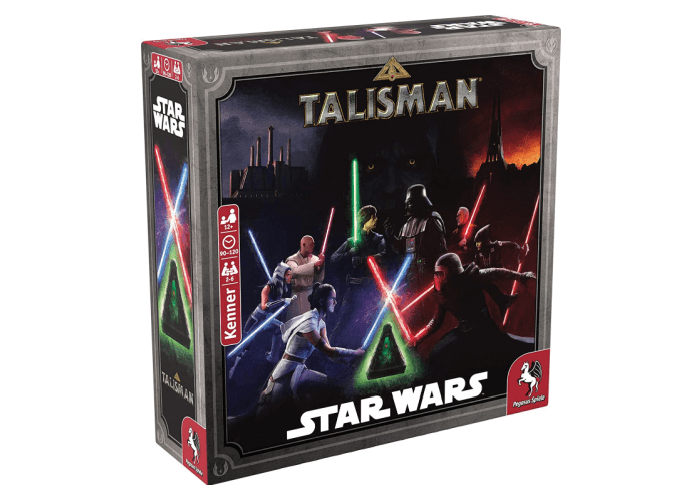 The Talisman: Star Wars combines the Star Wars saga with the classic roll-and-move game. Players have the choice of selecting from over 12 characters from the Star Wars franchise. They include Obi-Wan Kenobi, Luke Skywalker, Darth Vader and others. In the game, players can choose to defend the light or dark side of the force.

The goal is to compete in a circuitous race to reach Emperor Palpatine. Along the way, your character will collect items of power that will help defeat the evil emperor or rule by his side as a powerful apprentice. This is by far and wide the very pinnacle of board gaming quality! Based on the original Talisman game, this has been flavoured with all things Star Wars and comes with every single moment of fun the game has to offer. This is our top pick of this list, you absolutely won’t regret it if you’re a board game fan AND a Star Wars fan. 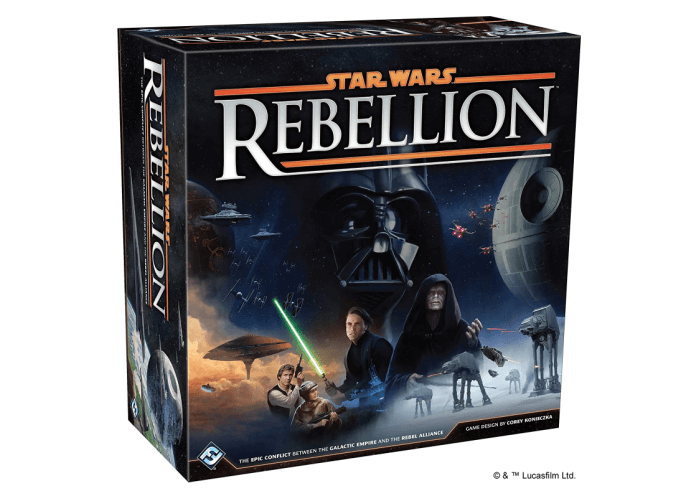 Relive the famous and exciting events of the Star Wars saga in the Star Wars Rebellion game. In the game, players have the choice of controlling the entire Galactic Empire or the Rebel Alliance. As the Galactic Empire, you command a legion of Stormtroopers, the Death Star and swarms of Ties.

By relying on the power of your massive military, not only do you enforce your will all over the empire but you rule by fear. To win the game, you need to snuff out the Rebel Alliance by finding their base and obliterating it.

You can also play on the Rebel Alliance side where you’ll command troopers, T-47 airspeeders, and fighter squadrons. While these forces do not match the Imperial military, you can execute military strikes to sabotage their build-yards. To win as Rebels, you need to sway the citizens to your cause. But you must survive long enough to inspire the galaxy to a full-scale revolt. 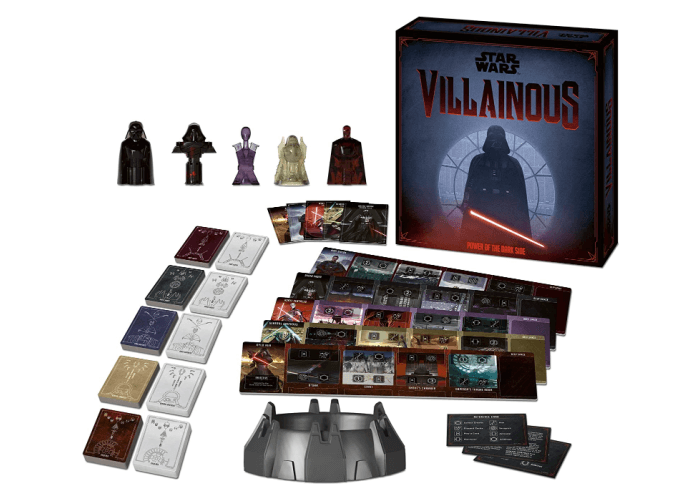 9. Star Wars Villainous Power of the Dark Side

Become a Star Wars villain and manipulate the Star Wars events in your favour in Star Wars Villainous Power of the Dark Side. Players can choose from Darth Vader, General Grievous, Kylo Ren, Assaj Ventress or Moff Gideon. As a villain, you’ll use your unique abilities to strategize and manipulate events to win.

While doing so, you’ll explore your sector to earn credits, recruit allies and much more to achieve your objective – defeat other villains. The game contains 150 villain cards, a tile, a tracker, 79 tokens, a chamber, five reference cards, five villain guides and a set of instructions. 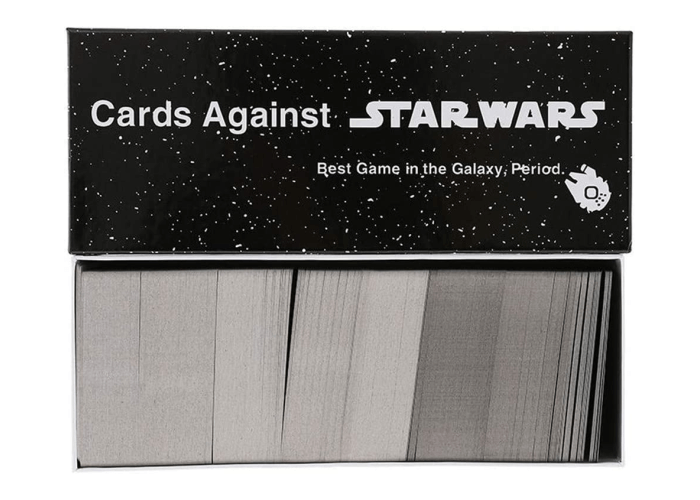 Ready to get asked some awkward questions? Cards Games Against Star Wars is a party game for people with a wicked sense of humour. In the game, expect anything from Darth Vader misusing his lightsaber or Princess Leia having relations with a Wookiee or Ewok.

While totally inappropriate, the game is hilarious. Perfect for adults who are not easily offended, the game contains 750 cards – 500 white cards and 250 black cards. To start the game, players must draw 10 white cards. The player who can do the best Wookie impression begins as the Sith Card Lord and plays the Black card. 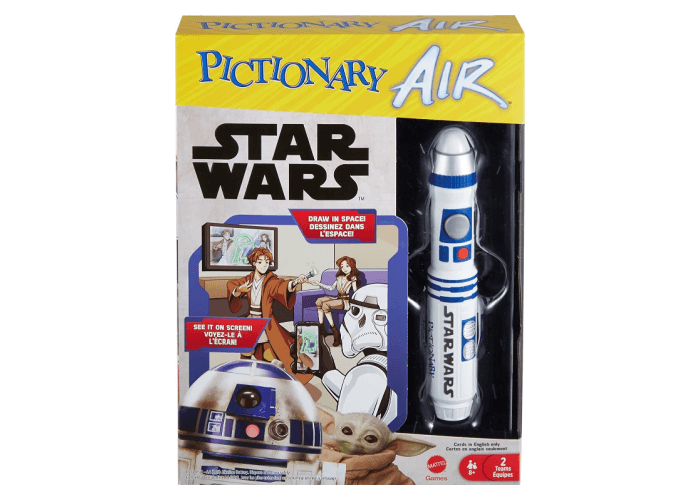 Draw your clues in space and see it on screen in Pictionary Air Star Wars. You can do it with a little help from popular droids such as BB-8, R2-D2 and others. The aim of the game is to show your Jedi drawing skills. 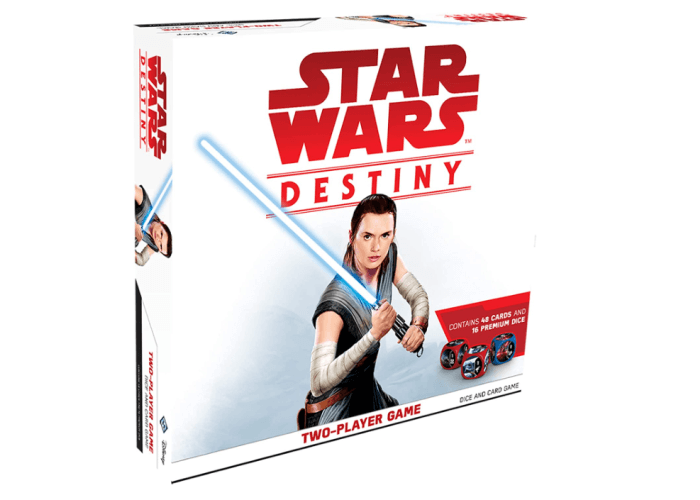 Gather your small team of Star Wars characters in Fantasy Flight Games Star Wars Destiny and defeat your foes. In this game, players can choose characters like Kylo Ren and Captain Phasma who will challenge iconic heroes such as Poe and Rey. The first player to deplete the health of other players through attacks wins the game.

However, you need to successfully outmanoeuvre your opponents. To do so, you’ve to strategize and consider your options. Also, you need to enhance your card deck with new cards and dice. Fantasy Flight Games Star Wars Destiny contains two sets of 23 card decks, instructions and other resources. 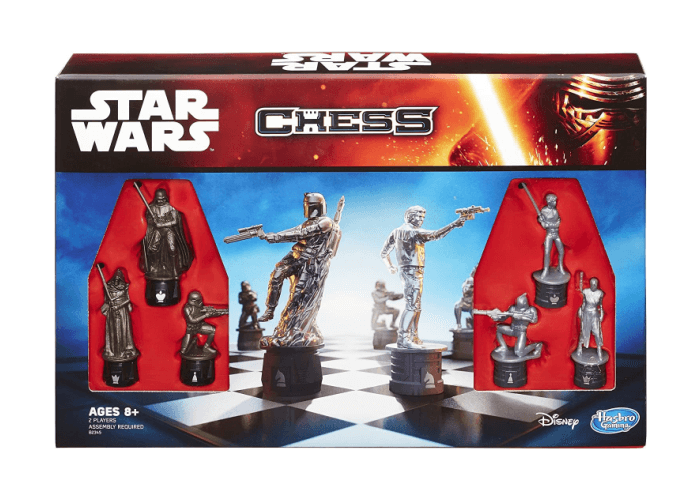 On one side, you’ve Emperor Palpatine as king, Darth Vader as Queen, Boba Fett as bishop and many more. Instead of white pieces, you’ve silver pieces with rebel characters such as Han Solo and R2-D2. With the new exciting chess pieces, you can checkmate your opponent’s king and win the game. 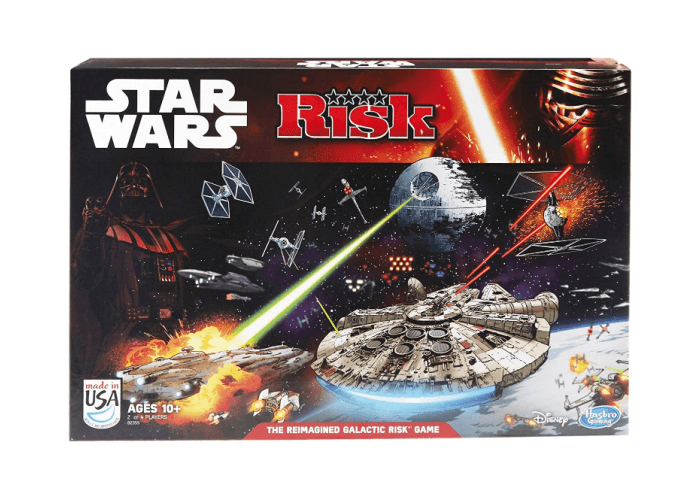 Recreate the final moments of Star Wars Return of the Jedi in the Risk Star Wars Edition Game. The TIE fighter-shaped game board features three theatres of combat where players can choose to defend or destroy the Death Star.

Players can strategize and take turns giving orders to either the Rebel or Imperial ships. There are different sectors on the battlefield, and to attack the Death Star, Rebels must destroy the shield on Planet Endor. As they do so, the Empire must protect the Death Star from attackers. No matter which side you choose, expect action and exciting adventures. 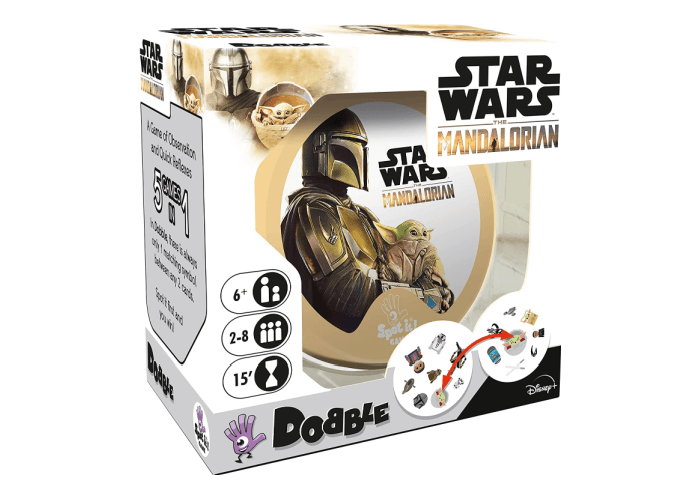 Dobble Star Wars Mandalorian is a smash hit game of visual perception where players race to match symbols between cards. Simple to learn and quick to play, players need to match one symbol between any two cards.

However, the match can be difficult to spot as the positioning and size of the symbols vary on each card. Since the game is usually based on visual perception and fast reactions, there is no advantage for players. As a result, it’s the perfect game for adults and children.