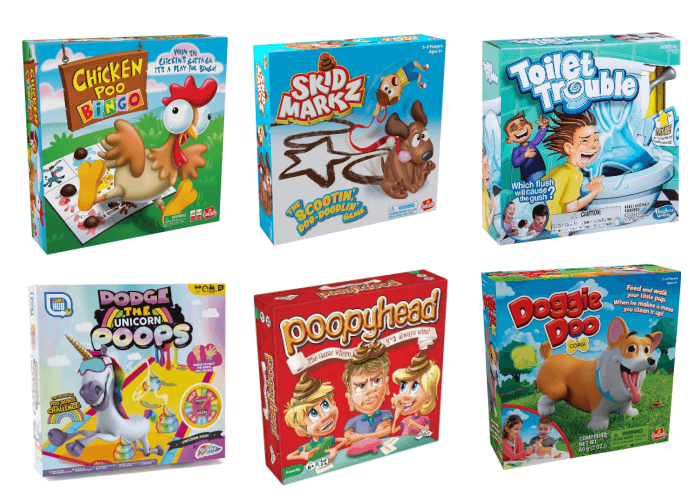 There’s a growing collection of Poop themed games on the market! in this guide we share 15 Poop Games that Gross Kids will love!… 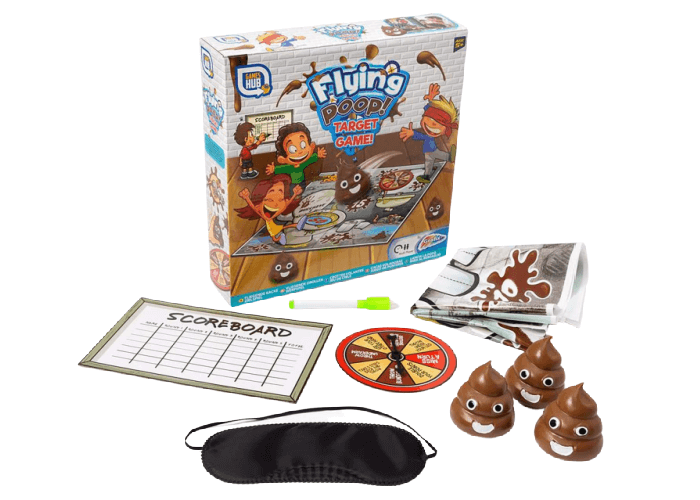 A parent-approved game that lets you sling realistic poop. Flying Poop! guarantees a fun time with friends or family members. You take turns spinning a mini-wheel, then trying to score points by flinging toy poop onto a target. The board game has a playmat, three sticky poops, a challenge spinner, marker and a blindfold. This game is suitable for Kids aged 5 and above. 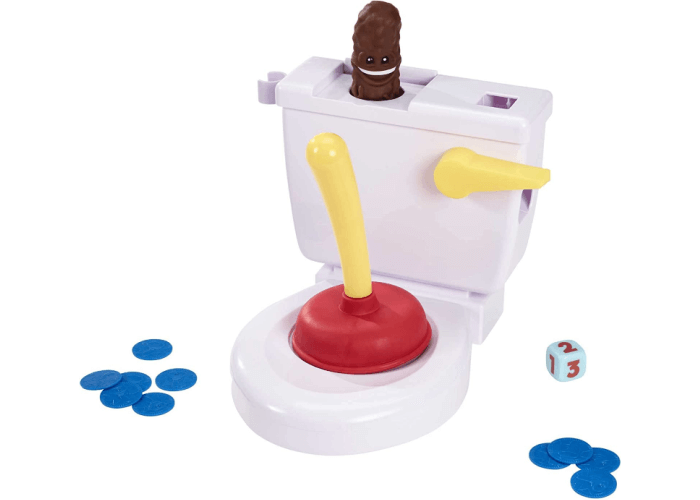 Flushin’ Frenzy is recommended for children 5 and up, and 2-4 players. It’s a relatively simple and quick game where you roll a die, then stick the included plunger into the toy toilet to try and pop the big poop out. Once it pops, the first one to grab it gets a token. You get two tokens if you somehow manage to get the poop in mid-air! 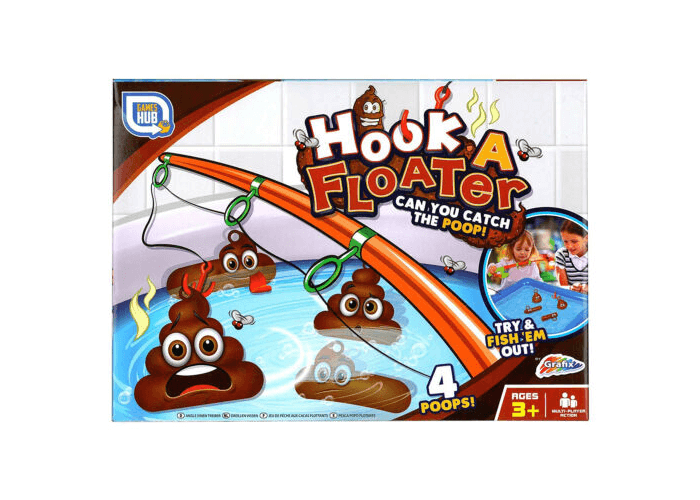 Forget the dining table! with Hook a Floater, you’ll need a bathtub to float poo floaters and try to catch them with a mini fishing rod (included in the game). The plastic poo is so realistic that you can even use them as prank props if you have a bit of a naughty side. Hook a Floater is a good choice for children aged 3 and up. 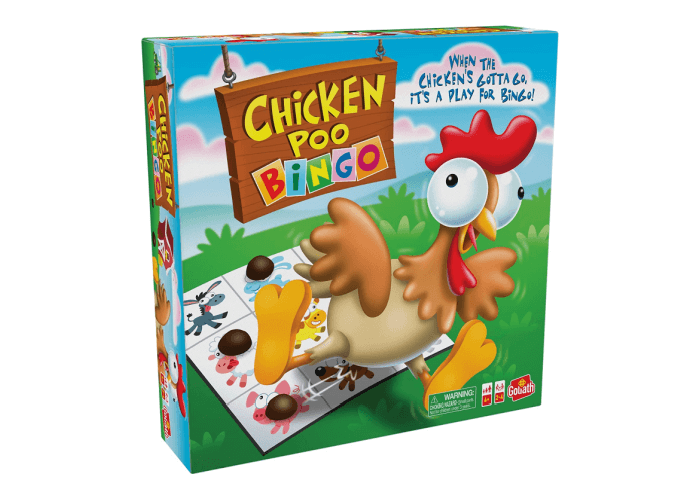 Who knew that bingo could be so disgustingly dirty? Featuring a chicken that’s had too much to eat, Chicken Poo Bingo will get you to wind the toy chicken up and wait until poop drops onto a bingo board. The first one to complete the pattern wins. The 2020 Young Inventor Challenge winner, Chicken Poo Bingo, is great for playing with 2 to 4 people and kids aged 4 and above. 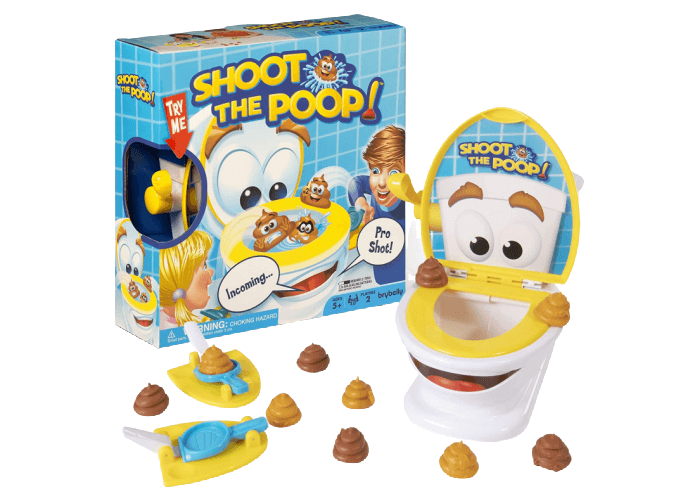 Shoot the Poop is a challenging shooting game where you use mini catapults to throw mini plastic poops in the toilet. Tank the Toilet occasionally belts out poop-related jokes and requires two AAA batteries. Two players can compete to see who’s the best at aiming for the bowl. 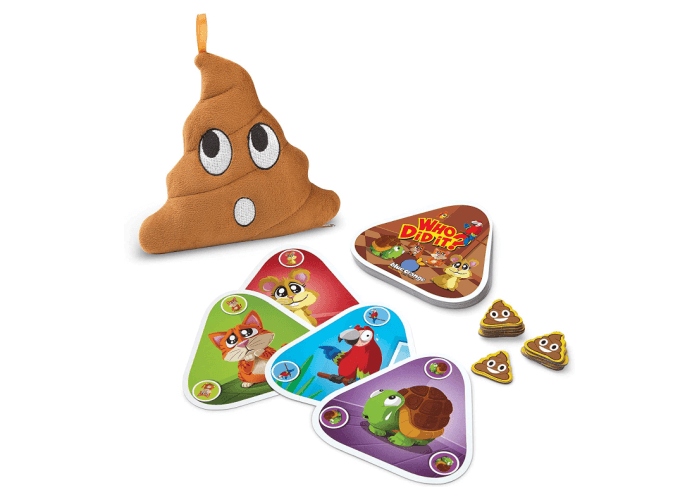 Who Did It Poo Bag Edition

Who Did It? Poo Bag Edition is a fast-paced game where you’ll have to think fast and rely on your memory to win. Basically, you’ll need to get rid of all the cards in your hand so you can point the finger on the culprit who made a stinky mess on the carpet. The game is super easy to pick up and play with easy to grasp rules and it is also very portable, perfect to take away on day trips! 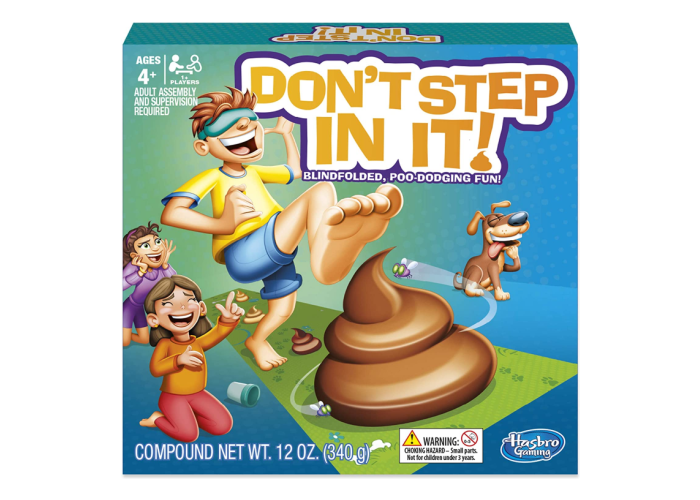 Don’t Not Step In It

Labelled ‘poo dodging fun’, Don’t Step In It is exactly the only instruction you need to start playing. The poop game steps it up a notch by having the players go through a mini obstacle course blindfolded. The winner is one who stepped on poop the least. 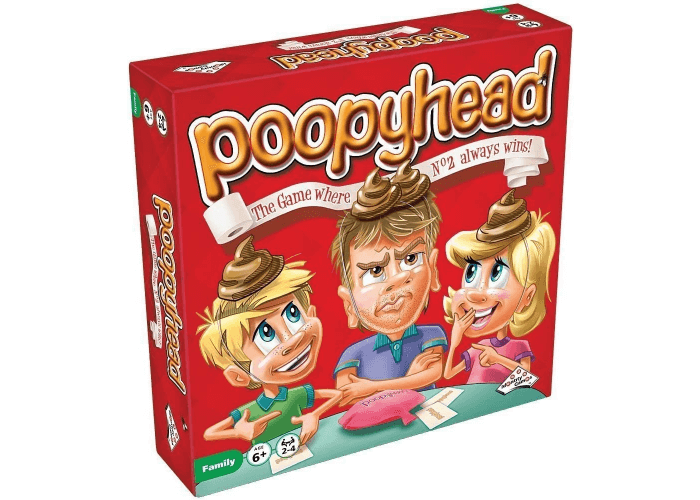 Poopyhead will have the loser wear plastic poop on their head as the game progresses. At it’s heart, its a card game in which you need to lose all your cards to win. Declare your victory by squeezing the whoopie cushion, which gives off a disgusting yet apt sound. The one with the fewest poop after five rounds wins. 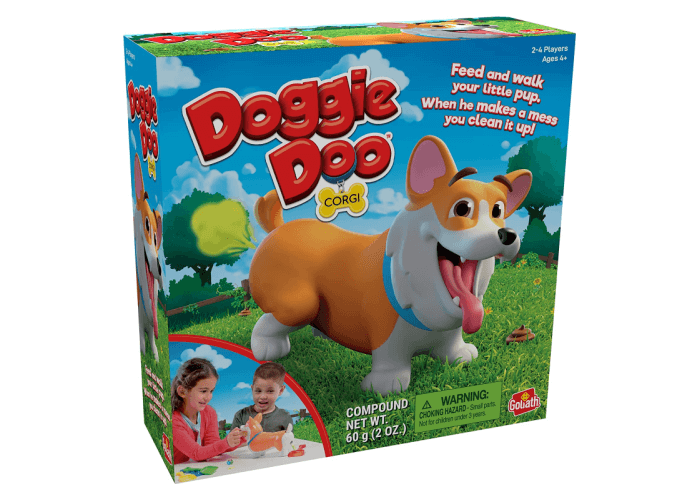 One of the most imaginative poop games around, Doggie Doo has a plastic dog toy that randomly sends out brown presents. You and another player take turns giving the dog a treat, then spinning the wheel to see how many squeezes you can do. If you’re lucky enough you can collect a toy poop on your turn. The player with the most at the end wins. 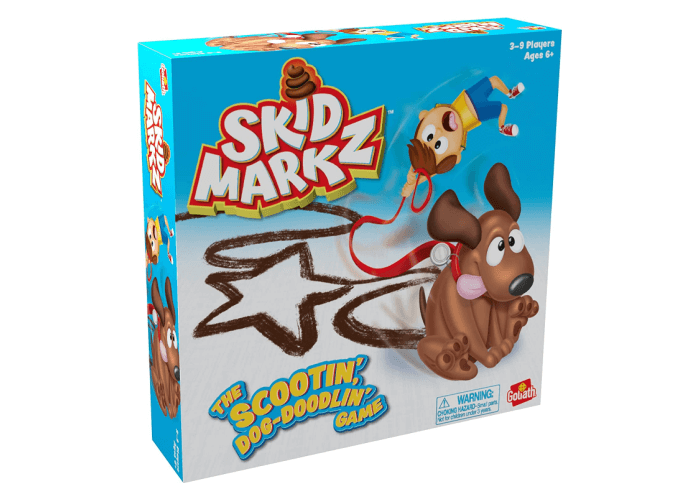 Skid Markz is essentially a doodling game that’s as grotesque as its namesake. You draw using brown markers and depending on the card you picked the other people start  guessing as to what it is. There’s a dog attached to the supplied marker and it looks like the precious pooch is trying to clean up his act as you go! As an added twist, you’ll need to complete tricky challenges such as drawing with your eyes closed, among other things.

A poop-themed game with a bit of baking thrown in, it doesn’t start until you make your own doo with the included dough. Once done, you’ll have to navigate a game mat blindfolded and hoping that you won’t step on the toy doo. There’s a wheel of fate to tell you what to do, and it’s a lot of fun for the whole family. Age requirement is low, as anyone aged 3 and up can participate. 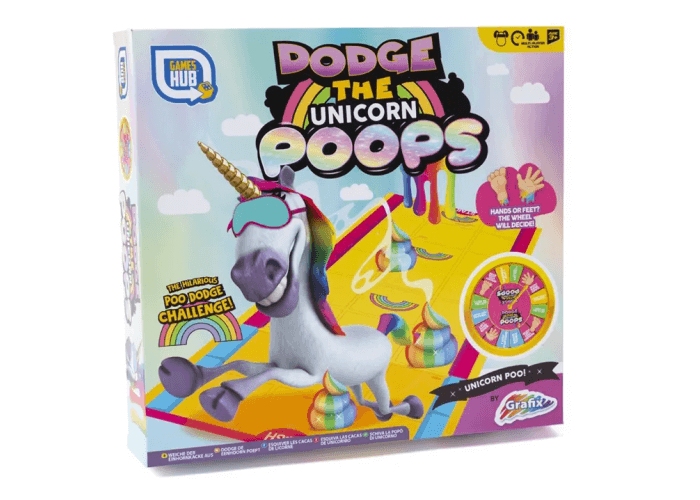 Dodge the Unicorn Poop is exactly as it sounds – walk across the play mat where poop is scattered, and hope that you make it to the other side unscathed. The poops in this game are beautifully designed as they’re rainbow-colored to coincide with the unicorn theme. It’s easy and offers a lot of laughs, making it the ideal game for family events and when you want to disconnect from electronics and spend time together. 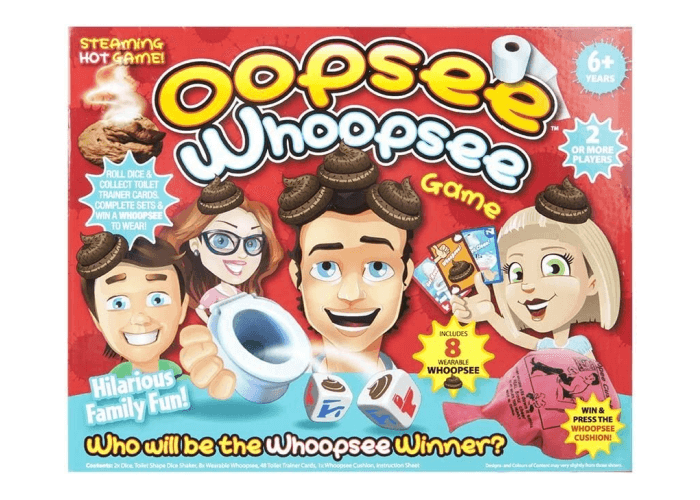 Oopsee Whoopsee the game is a badge of honour, as it means you get the most points and have won several rounds despite being covered in poo!  To play, simply roll the dice via a tiny toilet mug, then collect trainer cards and outwit the competition. What makes this poop game stand out is how the pieces have a lot of detail, and the poop you wear is rather realistic. Overall a good buy for a bit of family fun. 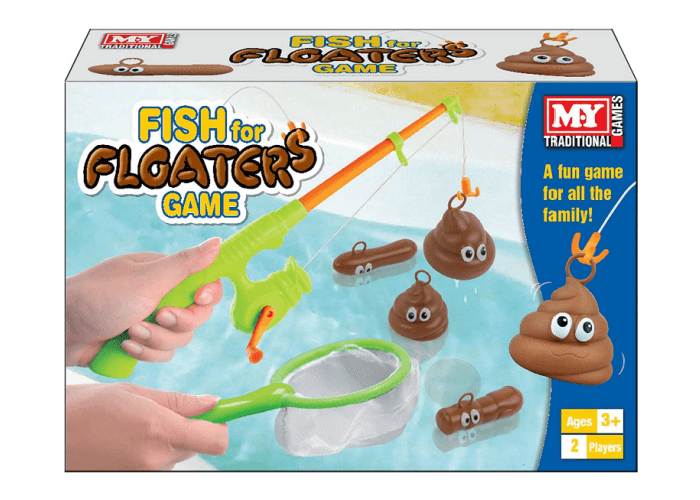 Fish for Floaters is another bathtime game. The poop here is made of light plastic and can float in the bathtub or swimming pool. Included is a small plastic fishing rod you can use to ‘fish’ out the poop and score points along the way. 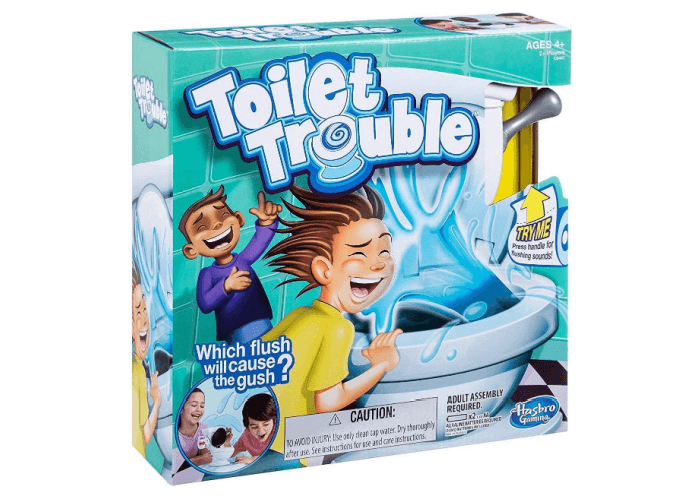 Toilet Trouble only has a single central piece, a toy toilet that can spray jets of water at random times. You roll the toilet paper and do the number of flushes required, but watch out for the geyser that can get your face wet. Toilet Trouble requires two or more players and is suitable for children aged four and up.