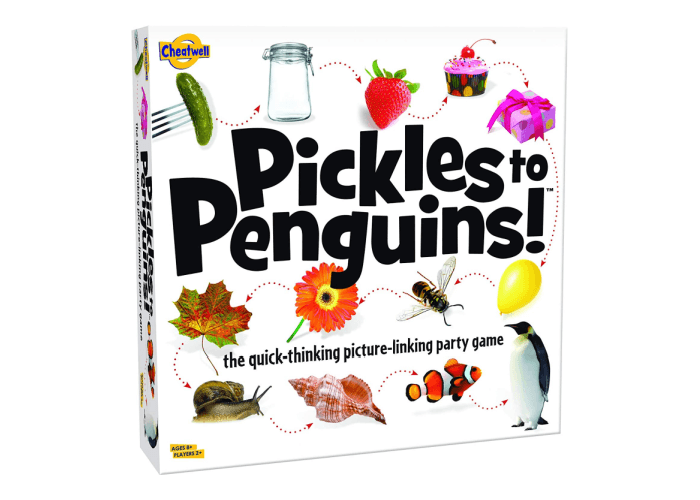 Are you in search of a new and hilarious game to play during parties? Party games are incredibly engaging. Not only do they enable people to mingle in ways that other entertainment forms do not. But they allow players to form bonds, practice critical thinking, and even learn more about each.

As aforementioned, play is an effective tool for keeping friendships fresh and exciting. However, finding the ideal party game that brings joy, and vitality to relationships is challenging.

Lucky for you, we have done the researched and found you the ultimate party game – Pickles to Penguins. Want to learn more about this game? Keep reading!

What is Pickles to Penguins?

Pickles to Penguins is the ultimate picture party game that calls for quick thinking. Designed for competitive people, the picture-linking game is for 2 or more players.

The game includes 528 cards with pictures of various animals and other things such as a fire engine, helicopter, piggy bank, and more. From the hundreds of pictures on the cards, players need to think fast and demonstrate how to link together.

For example, do the pictures on the cards share the same colour or do they both eat the same thing? Players don’t have to take turns when playing this frantic party game. It’s an all-out. The end game is for the players to get rid of their piles of cards as fast as they can.

What Age Is It Suited For?

Imagination’s Pickle to Penguins game is for ages 8 and up. Playing this game with your family, including your kids is fun. Not only will they learn to share, learn to lose and much more. But they will also learn a little patience and develop a skill for spotting links.

Studies show that kids who play games at home learn skills that help them at school and in social situations. Games also improve concentration, increase their short-term memory and train their visual memory. It doesn’t have to be a special occasion to make game time. You can simply prepare a few snacks and drinks such as popcorn, sandwiches and juice.

It doesn’t matter who you play with, this game is sure to bring something to any group. You can play with your children, nieces and nephews, your partner or on your lunch break with some work colleagues! It’s such a blast of fun, it’s the perfect way to blow off steam and have a laugh or two.

How Many People Can Play?

Two or more players can play Pickles for Penguins board game but the more the merrier definitely applies!

How to Play Pickles to Penguins…

Playing Pickles for Penguins is easy. Simply shuffle the cards and deal 25 cards to each player. Then, the players will lay five of these cards in front of them and leave the rest in a pile beside them.

As aforementioned, each card has an item on both sides. So, before beginning the game, the players need to look at both sides of the cards. This will enable them to become familiar with all thier cards.

Next, the dealer will turn over the two cards from the draw pile and place them side by side on the table. To start the game, the dealer will say “Go.” and the players will all start their turn. This game is NOT a turn based game, instead it’s one of speed and quick thinking. Once the game starts, all the players must place cards from their own piles on top of either one of the two cards at the centre of the table.

While doing so, a player must make a link between the two cards. The player needs to do so in a full sentence and include the name of the items. For example, one of the cards at the centre of the table has the item snail. A player can place a leaf card and say “Snails eat leaves.”

Players can only place one card on the centre pile at a time. As the players use the cards from their deck, they replace them with those from their pile. Players may get stuck. In fact, this may happen when players cannot find a linking image to their player’s deck.

In such a case, the dealer will turn over two new cards from the draw pile and the game begins again. Another issue is when a player places a card without providing a link between the cards and another player disputes it. If this happens, all play stops immediately.

The rest of the players will discuss whether to accept the connection or penalize the player. They can do so by giving the player 5 extra cards from the draw pile. What you need to know is that there are invalid connections not allied in the game. They include:

Pickles for Penguins is a hilarious game where players need a fast mouth, mind and hand to win. Fun game for all ages, the game provides plenty of new vocabulary for you and your kids to learn as you play. Not only that. The pictures provide clear examples of existing animals and other objects. If you’re looking for a fun board game that can offer a different experience each time you play, Pickles for Penguins is absolutely for you. If you are more of a structured gamer then this may be a challenge, but the chaos is definitely worth it!