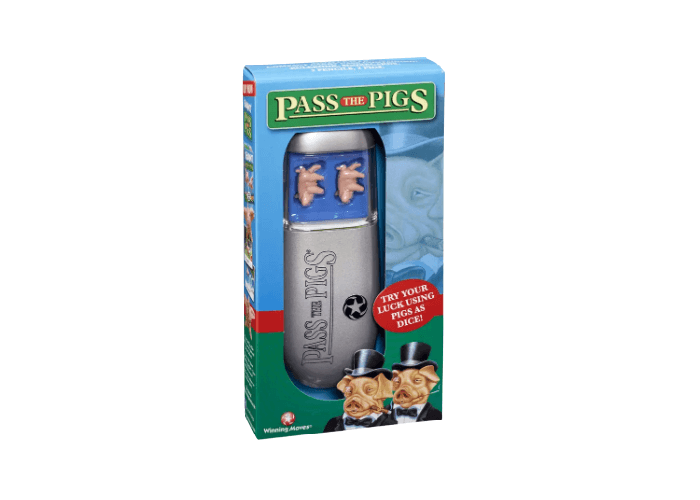 Pigs, pigs, pigs! If you’re looking for a dice game that’s more fun and unpredictable than Yahtzee or Monopoly, then Pass the Pigs is the one for you.

This hilarious variation of traditional dice games will keep you entertained for hours. With two pigs on the table and only 13 chances to score, you’ll need all your cunning and strategy skills to come out on top.

So gather your friends, roll those dice, and see who can become the ultimate Pass the Pigs champion!

How to Play Pass the Pigs

Pass the pigs is an easy game to play. Players can score points by rolling two pig-shaped dice. The pigs can land in various positions, each with different points. The first player to reach 100 points is the winner.

The game features two pig dice, a scorecard, a scoring cheat sheet, and a pencil. To decide who goes first, each player rolls both pigs once. The player with the highest score after this initial roll goes first. Once the game is underway, players take turns rolling both pigs. The score is determined by the position in which the pigs land.

The game continues until one player reaches 100 points or more. However, if two players earn this score simultaneously, the player with the highest total wins.

Scoring in Pass the Pigs is relatively simple, as each pig’s position is worth several points. Here’s a breakdown of the different scoring possibilities:

The sider: Worth 1 Point. Both pigs land on the same side (either lying dot side up or unmarked side up)

Double trotter: Worth 20 points. Both pigs land on all four feet.

Snouter: Worth 10 points. One pig lands on its front two feet and nose, while the other is on its side. If the other pig lands on any different position, that’s a mixed combo.

Double snouter: Worth 40 points. Both pigs are standing on their front two feet and nose.

The Leaning Jowler: Worth 15 points. In this case, one pig lands on its jowl, supported by one front foot, snout, and ear, while the other is lying on its side. If the other pig lands on any different position, that’s a mixed combo.

Double Leaning Jowler: Worth 60 points. Both pigs land on their jowls, supported by one front foot, snout, and ear.

Mixed combo: Sum of individual scores. Pigs land in any combination of Razorback, Trotter, Snouter, or leaning jowler positions. (Example: Trotter roll is 5 points and Snouter is 10 points, equals a combined total of 15 points, and so on).

Pig out: Worth 0 points. Both pigs land on opposite sides, one dot up and one dot down. When this happens, the player’s score for the turn is wiped out. Play passes to the next player.

Makin’ Bacon (Oinker): Both pigs are touching each other in any position. The player loses all points accumulated for the game and must pass the pigs.

Piggy Back: One pig is standing on top of another pig. That is an undignified pig position. Therefore, the player is eliminated from the game and must pass the pigs.

Another way to play Pass the Pigs is the “Hog call.” This means to predict in which position the pigs will fall. Players can choose to hog call when they have scored 20 points or more. However, the one to make a hog call must be a non-throwing player. If guessed correctly, the caller receives double the points thrown, and the thrower loses double the points thrown. The opposite happens when the caller is wrong.

Pass the Pigs is suitable for players of ages 6 and up and more than 1 player.

Pass the Pigs is a great game for family fun. It’s easy to learn and can be enjoyed by players of all ages. The game’s goal is to roll the pigs in various positions and score points depending on how they land. After a set number of rounds, the player with the highest total score wins the game.

It’s an excellent game for improving hand-eye coordination and strategic thinking. Plus, it comes with an exciting “Hog Call” feature that offers double the points when guessed correctly.

With its simple rules and fun gameplay, Pass the Pigs is a great game to add to your board game collection! Happy Rolling!