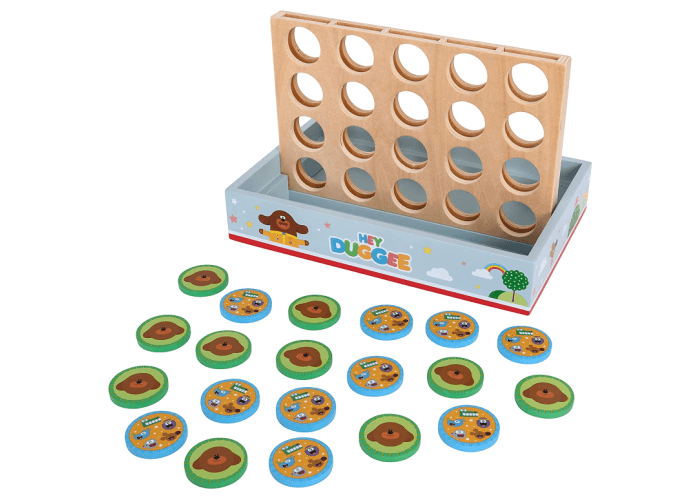 Most kids and their parents will have heard of ‘Hey Duggee’ by now. The popular cartoon has become quite a hit and features a friendly dog named Duggee and his band of ‘Squirrels’. If you can’t get enough of the Squirrel Club’s adventures on the television, then I suggest you give these 4 Hey Duggee games a try. 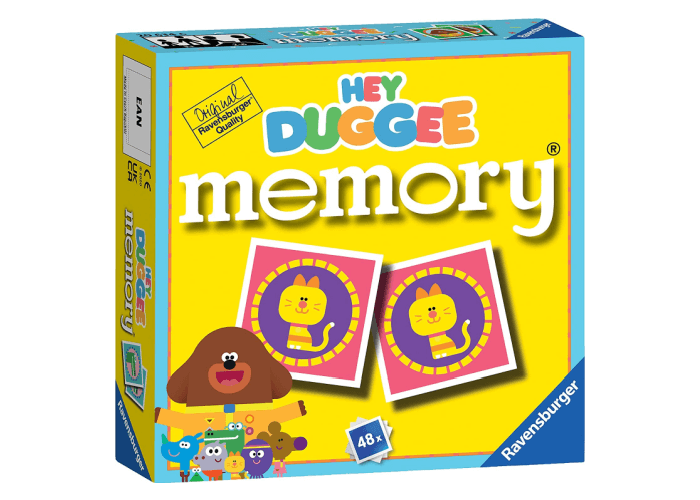 The Hey Duggee Memory Game is a great activity for your three-year-old as it tests their memory in a fun way. The memory cards are thick and can take punishment from tiny hands, and the prints are bright, colourful and won’t fade quickly over time.

The objective of the game is to match the same Hey Duggee character in pairs. Children will instantly recognise and delight at pictures of the cast, including Duggee, Happy, Roly, Enid, Betty, Frog, Norrie and Tag. You’ll have 48 cards, and a game can accommodate anywhere from 2-6 players. What’s great about this Hey Duggee game is that you can bring it anywhere.

The best way to introduce this memory game is to start slow- just have your child match two or three sets total, then increase the number of cards as you go along. The game comes in a box so you can store the cards for use later on. 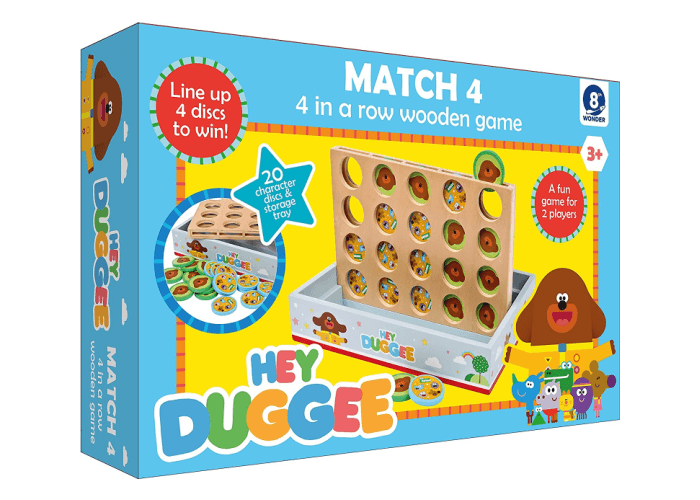 Compete to win with your little one when you break out the Hey Duggee Wooden Match 4 Game. That said, you should give your toddler a chance to win so they can have a great time.

The game teaches a few valuable life skills, including hand-eye coordination and logic, as well as having enough patience to wait for your turn. You may have to spend a bit of time showing your child how the game works, but then you’ll be sure to have a blast once he or she gets the gist down.

The player to get four discs in a row is the winner. With the wooden match four game, it’s Duggee versus the Squirrels. You get a nicely printed Duggee character face on each side of the wooden chip, and the board is also made from the same material.

Handling the wooden discs is easy, and it won’t slide or produce splinters. Afterwards, you can put the pieces in the handy storage box for playing at home or on the go. 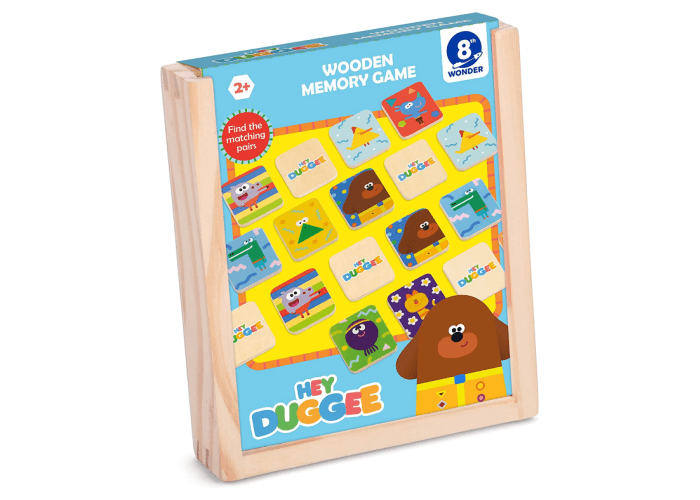 Traditional meets popular cartoon franchise in the Hey Duggee Memory Match Game. Let your children play with the pieces first before laying down the rules- they’ll love the colourful print on each side and recognize the characters they see on the television.

Instead of the usual circular shape you get a square piece. The material is quite thick and has smooth and rounded edges so you and your children won’t get injured while handling the pieces. It’s also one of the few themed memory match games to have minor Duggee characters, such as the chicken, frog and cat into the mix.

The game set has the distinction of being made from responsibly sourced material. As always, the product includes a storage box where you can place all the pieces. Bust it out on a rainy day, or bring it along with you on road trips to beat boredom.

A stacking game will fit right in the cartoon’s whimsical and fun nature, and your little one will definitely have fun putting all the Hey Duggee characters on a makeshift tower.

The Hey Duggee Stacking Game has one simple rule- get the wooden Hey Duggee-themed items and put them atop each other. Continue doing so until all the pieces are on the platform. However, your kid will find out that it’s not that easy- doing the activity requires motor skills, critical thinking and balancing the pieces that they support each other.

Your kid can also choose the placement on their favourite Hey Duggee characters or lay them down and do an impromptu episode using their imagination. A stacking game equals endless fun and gives them something to do and learn at the same time. In addition, the finely crafted items are great for little hands.