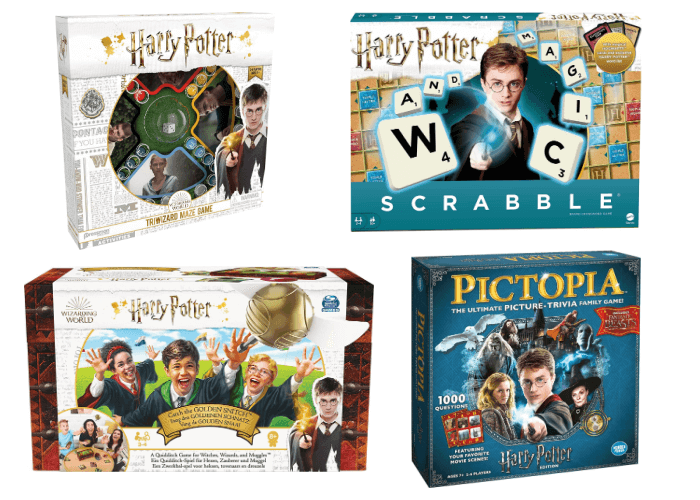 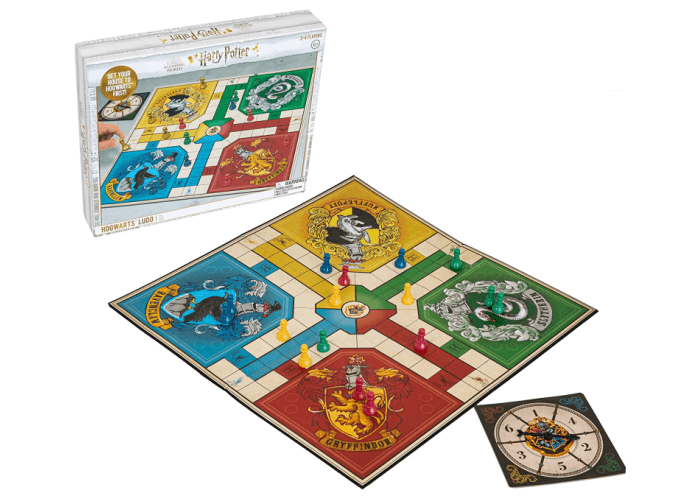 A magical twist of the classic Ludo, Hogwarts Ludo will have you and your kids or friends taking control of a House to try and get to the centre of the board first. The house board designs are breathtaking and intricate, and it feels like you’re really taking part in a magical game.

Hogwarts Ludo accommodates 2-4 players, and children aged 6 and above should be able to play it and have fun. Each round consists of 30 minutes, and instead of a dice you get a cool mini number spinner. 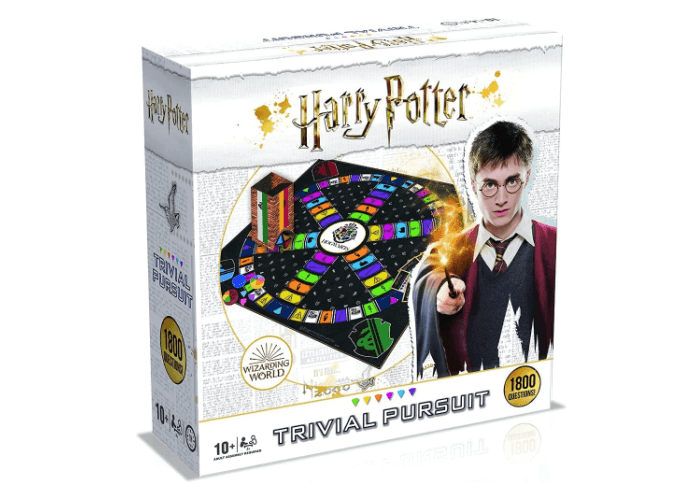 Harry Potter Ultimate Trivial Pursuit is a must-have for Potterheads and those who wish to show off their knowledge of the wizarding world.

The objective of the game is to move around the board and answer quick-fire questions, all of which are based on the Harry Potter franchise. The game box includes an impressive 300 cards that contain a whopping 1,800 questions, coloured dice and a gameboard. Trivial Pursuit is marketed as ages 10 and up (in line with the films). 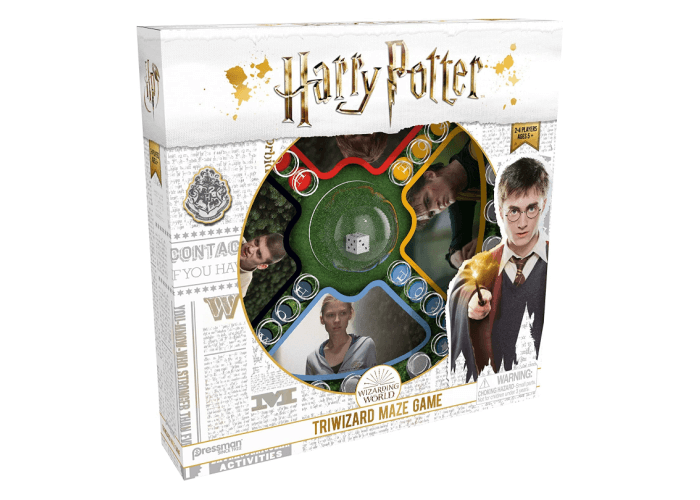 If you’ve ever wanted to participate and think you have a shot at winning the Tri-wizard maze, then this is the chance to prove it. This board game accurately represents the obstacles and layout of the hedge maze, with the objective being the first to get to the Triwizard Cup in the centre of the board!

The Harry Potter Tri-Wizard Maze is suitable for ages 5 and up, and features a Pop N’ Race style board game. Up to four players can participate and have fun. 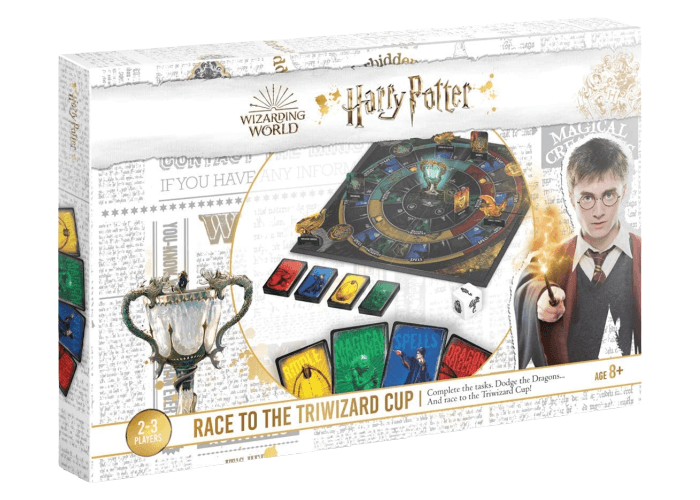 Race to the Triwizard Cup Game

A more advanced version of a Triwizard board game, the Harry Potter Race to the Triwizard Cup Game is suitable for ages 8 and above. Adults can also participate and up to three players can join in.

The richly detailed print, pieces and cards will pull you in and make you forget that you’re in a muggle world. As one of the three wizards, your goal is to be the first to get to the Triwizard Cup. Along the way, you’ll be firing spells, evading monsters and hunting for the Golden Egg. Make no mistake, this game plays very differently to the Tri-Wizard Maze!

Harry Potter Cluedo is an excellent take on Cluedo, but this time you’re transported to Hogwarts and play any of the six iconic Harry Potter characters Luna Lovegood, Neville Longbottom, Ron Weasley, Hermione Granger, Ginny Weasley and the hero himself, Harry Potter.

Roll the dice and move around places to gather clues and question other players. The murder items have been changed as well, from the cursed necklace to poisoned mead and even a jinxed broomstick, as well as spells such as stupefy and inciendo. The minimum number of players for this Cluedo spinoff is 3, and the minimum age is 9 and above. A fantastic flavour on the board game classic! 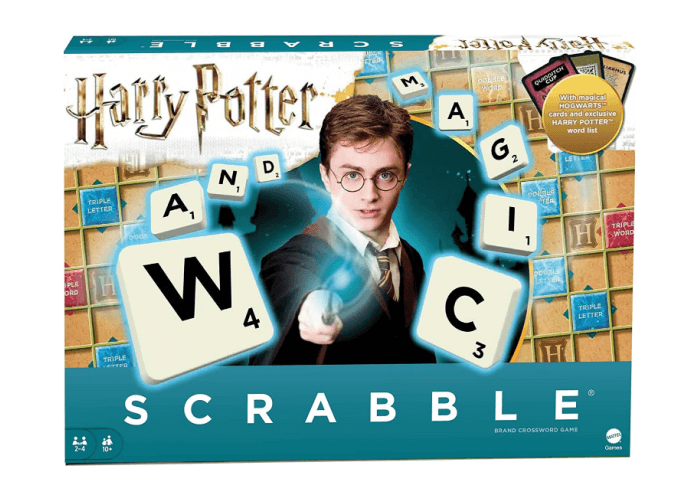 Classic Scrabble gets a magical makeover with the Scrabble Harry Potter board game. It’s a full-fledged product, with the requisite racks, tiles and a board that has raised edges to hold the tiles in place. This lets you play a wizard-themed Scrabble while traveling on the road.

In this board game you’ll be able to lay out Harry Potter-themed words via a unique glossary you can peruse. As a nice bonus, you get a deck of Hogwarts cards that relive key moments and make you appreciate Harry Potter more. The bigger fans will get more out of this one by using the rich worlds lore to their advantage!

Scrabble Harry Potter can be played by 2-4 players and is good for children aged 10 and up. 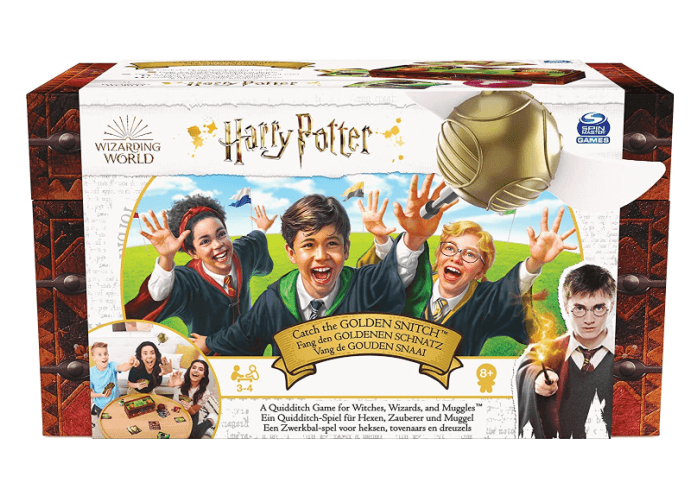 A fast-paced board game based on the magical sport of Quidditch, Catch the Snitch lets you play to try and get the Golden Snitch versus other players.

There are various elements attached, such as cards you can play to earn sets and bonuses that prevent your opponents from advancing. When the golden snitch appears, whoever gets it will be awarded points and signals the end of the round.

The game accommodates 3-4 players and ages 8 and up. 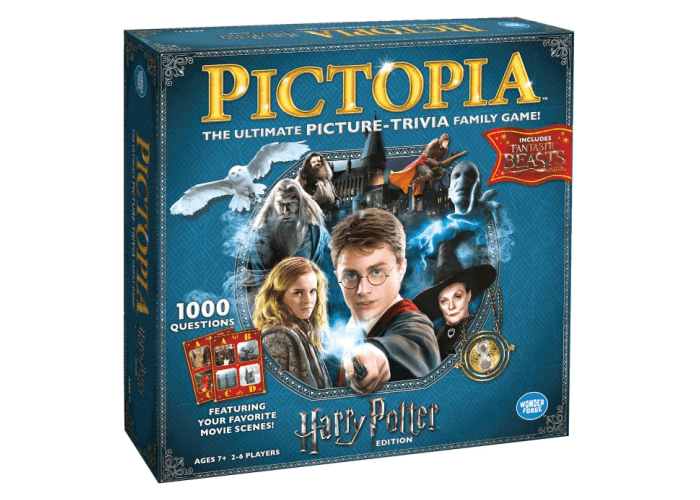 Harry Potter Pictopia is an excellent trivia game that encompasses the whole of the Harry Potter universe. Included in the game are instructions, dice, six movers, wager coins, answer dials and 200 trivia cards. You draw cards detailing 4 images and asnwer questions in relation to the images.

It’s worth noting that the pieces are detailed, contain high quality prints and are made from premium materials. That said, the game should stand the test of time and be ready when you are. Gather friends or family members, as the board game is played between 2 to 6 people and at ages 7 and up. 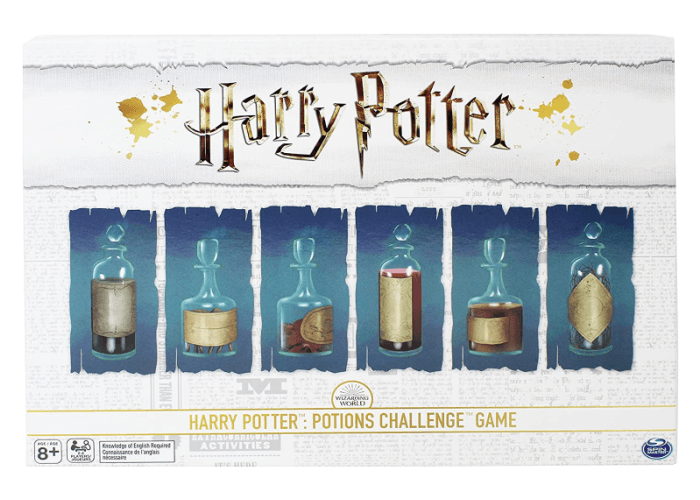 One of the most unique Harry Potter board games around, the Potions Challenge Game lets players gather ingredients to create their assigned potion. Basically speaking, you move around the board to find and gather potion components, then bring them back and recreate the potion to submit to Professor Snape. As always, the first one to complete it wins the game.

Children aged 8 and above can play, and the board can accommodate between 2-4 players at any given time. The game includes four lenticular wands for that added flair and effect, and for seeing the secret ingredients. Overall, a must-have for your Harry Potter board game collection. 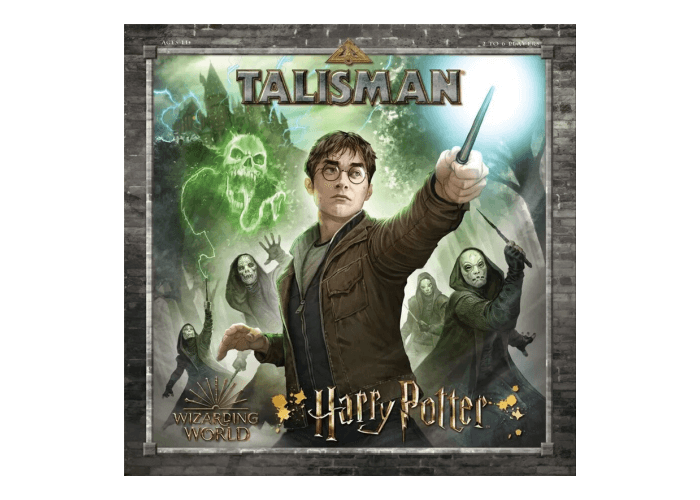 Talisman Harry Potter is a complex game that can take anywhere between an hour to an hour and a half to play. Teens and those aged 13 and above can play, and it’s suitable for 2-5 players.

The board game is somewhat like an adventure game where you play as a Death Eater or a member of the Order of the Phoenix. The cards have so much detail in terms of illustration, text and design, and the game feels polished as a whole. The figurines are a superb touch and bring a nice wizardly-like atmosphere when you’re playing with friends or family members. From strategy players, casual gamers or new players Talisman is a phenomenal example of the quality board games can bring to the table!