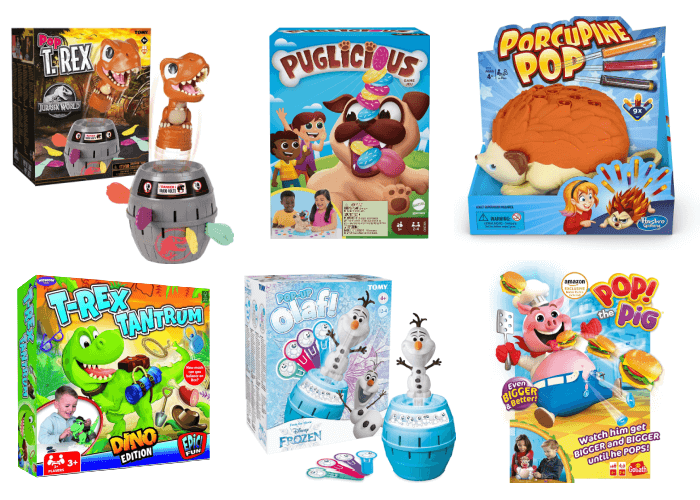 Pop up Pirate is a game that has been around for years and is a favourite among many people. But what if you’re looking for something similar to play?

And who knows, you might even find a new favourite game to play! 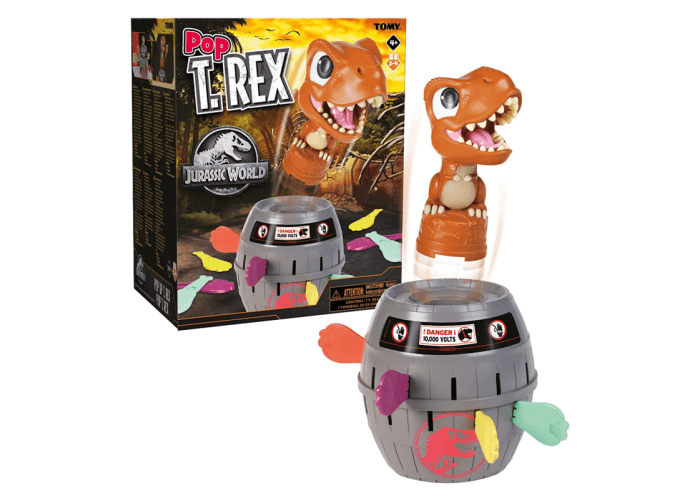 Pop T.Rex is a thrill game that immerses you in a Jurassic world. In this game, you slip dinosaur bones into a crate, hoping the dino doesn’t pop. The game is played by inserting any of the coloured dinosaur bones into the crate and then waiting for the big surprise of the dinosaur popping from the top.

Pop T.Rex is a game of survival and surprises, as no one knows when the dino will pop out next. The last player standing wins the game.

Pop T.Rex is a fun and addicting game that is perfect for those moments when you need a quick distraction. The game is ideal for explorers of any age and is recommended for age 4 and above. For the best experience, 2-4 players are recommended.

Caution: The small parts of the game can be a choking hazard and should be kept out of kids aged 3 and below. 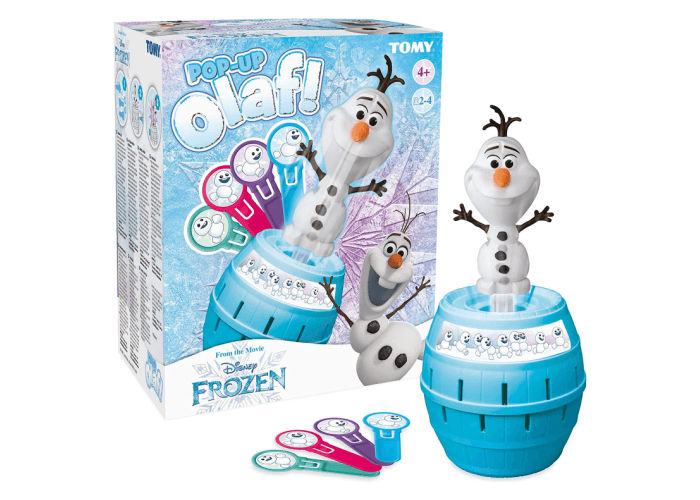 Second on our list is Pop Up Olaf, a classic family action fun game with a Disney’s Frozen twist.

In the Pop Up Olaf game, players take turns to slide coloured ice-themed tokens into one of the randomly selected holes. The goal of the game is NOT to make Olaf set flying. The last player standing wins the game.

To restart the game, twist Olaf down and then once more slide your crystal sticks into the holes of the barrel. The hole will change for every single round, so there’s a new twist and thrill every round.

The game is great for kids because it is both fun and educational. It enhances decision-making and speech development.

Pop up Olaf is ideal for 2-4 players aged between 4 and 10. Adults will also find this game thrilling as no one knows when Olaf’s head will pop up. 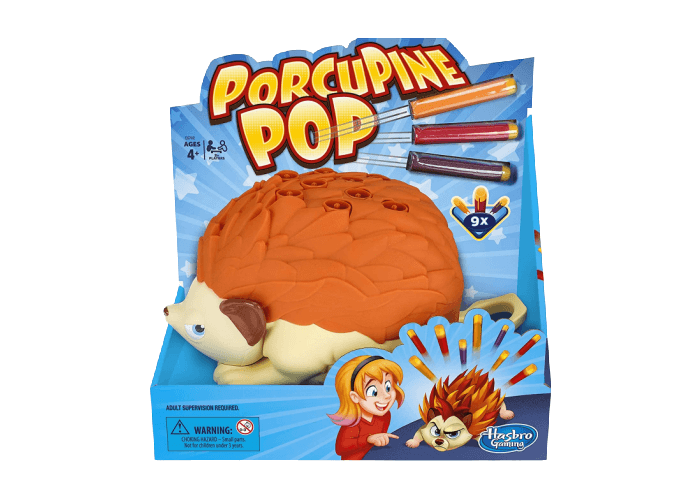 There are 3 ways to play Porcupine Pop: original play, add up points method, and reverse-winning play!

In the original method, players roll the dice, press the porcupine’s nose guided by the numbers indicated, and wait to see if the porcupine pops and sends the darts flying. The last player standing wins the game. As the waiting grows, the game becomes more thrilling.

The points method is just a twist of the game where players earn points for particular accomplishments.

The reverse-winning player is like the original, only that the first player to make the porcupine pop is the winner. 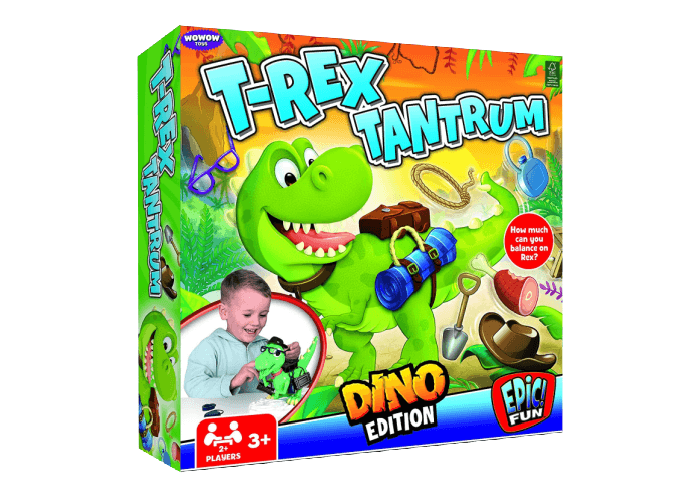 Looking for a fun game similar to Pop up Pirate to play with your friends or family? Then you need to check out T-Rex Tantrum. In this game, you take turns trying to stuff Rex with accessories. But be careful – if you make him angry, he’ll start throwing a tantrum, and you’ll lose the game!

To start the game, push the T-Rex to the start position and begin feeding the dino. Remember, you are also out of the game if your accessory falls.

This game is great for kids and adults alike. It’s easy to learn but can be quite challenging, making it perfect for a family game night. T-Rex Tantrum is also a perfect gift for a Christmas or birthday. 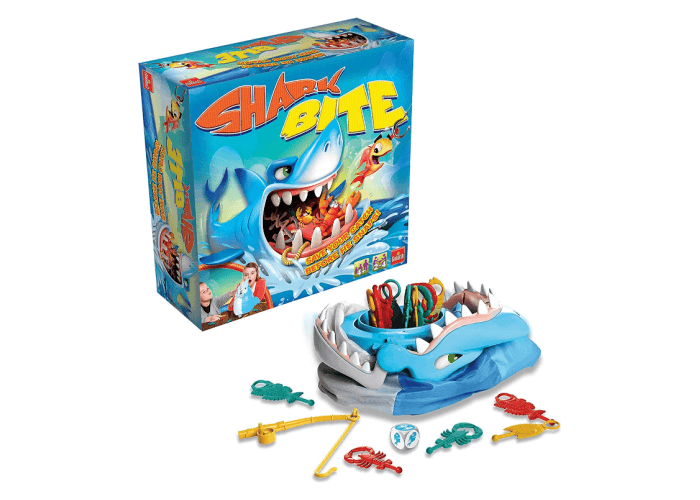 Shark Bite is the perfect game for those who love adventure and suspense. In Shark Bite, players take turns rolling a dice to rescue their fish catch from a shark snap. The player with the most fish at the end wins the game.

To start the game, open the shark’s jaws and then push them to lock. Place your 12 fish into the shark’s mouth and roll a dice to see how many fish you catch from the shark’s jaw. Use the fish rod to save your catch, but be careful not to drop your fish.

Continue until there’s no fish left in the shark’s mouth. Hoping the shark didn’t snap all your fish and provided you are left with the most fish and the end of the game, you are the winner. 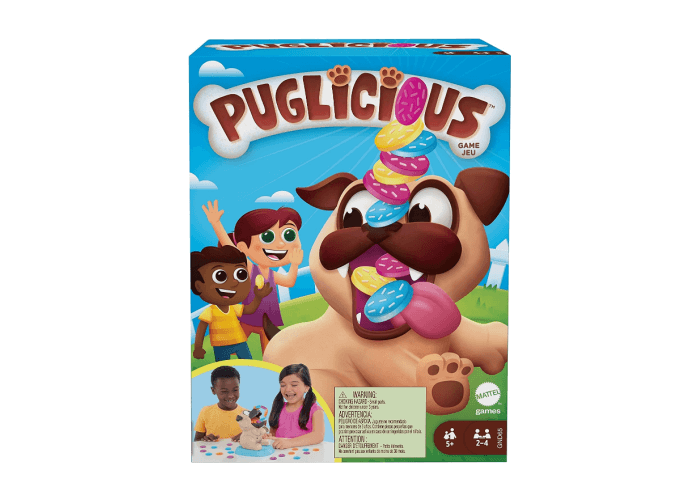 In Puglicious, players take turns feeding a pug’s nose and then push its paw to eat the treats. Whoever makes the pug eat the treats keeps them. Otherwise, the treats retract to the draw pile. The winner becomes the player with the most treats at the end of the game.

The pug puppy can take a lot of treats in his mouth, but the catch is, it has to eat your treats for you to win them.

Puglicious is a dog lovers game perfect for kids age 5 and above. It’s a fun, fast-paced game that is sure to get everyone laughing. Kids will especially enjoy watching the pug flip to get the treats. 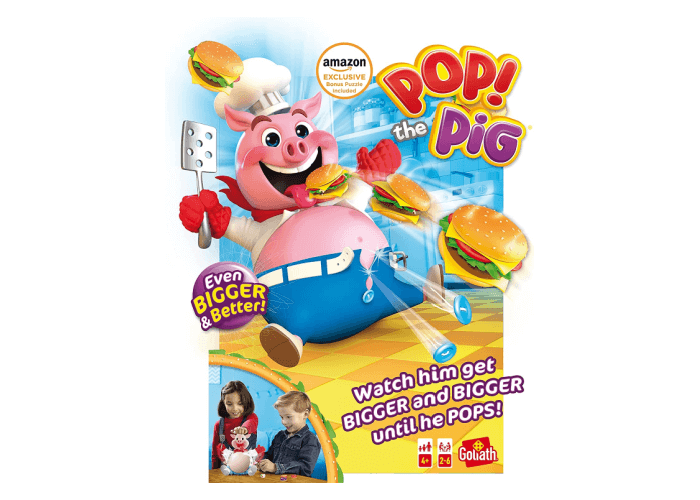 Pop the Pig is a game of numbers, colour recognition, and counting loved by many kids internationally. The game’s objective is to feed the pig as much hamburger as possible until his stomach bursts. The game is for 2-6 players and is fun and easy to play.

Each player chooses a colour to set up the game and takes the corresponding game board, tokens, and score pad. The player with the green game board starts the game. To play the game, the player rolls the die and then feeds the pig that number of pieces of food.

If the pig eats all of the food, the player gets to move again. If the pig throws up, the player loses their turn. The first player to reach the finish line wins the game.