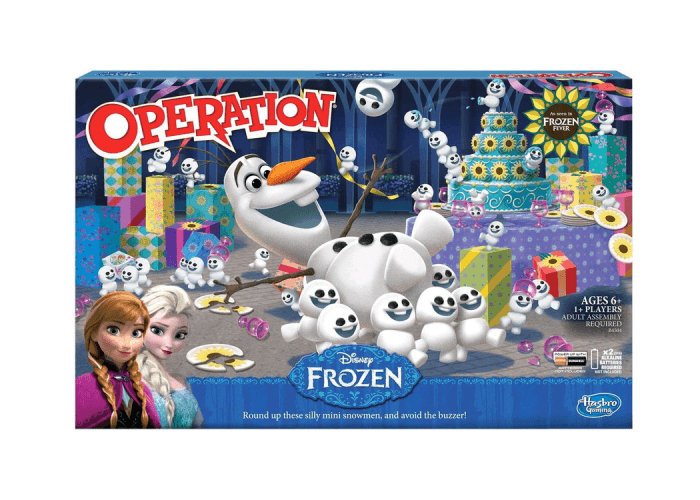 Want to test your kids’ hand-eye coordination and fine motor skills? In 1964, John Spinello, a University of Illinois industrial design student, invented the classic board game,  Operation. Upon graduation, he sold the rights to the game for $500 to Milton Bradley.

Disney’s Frozen is one of the most popular kid’s animations. Released in 2013, not only did the film introduce fan-favourite characters like Olaf, whom kids have come to know and love. But its visuals, voice acting and screenplay made the film one of the best animations of the studio’s renaissance era.

Today, kids can pick snowmen out of Olaf in the Frozen Operation. Want to learn more about this game? Keep reading!

What is Frozen Operation?

Frozen Operation is a dexterity based game where kids try to pull snowmen out of Olaf, Frozen’s beloved Snowman mascot. The game includes an illustrated board, 12 little  plastic snowmen (Flurries), a pair of tweezers and instructions. Based on  the spin off film, Frozen Fever, the game follows the story that Kristoff and Elsa want to give Anna the best birthday party ever!

However, mini snowmen sweep in and start creating chaos. At some point, they almost ruin the birthday party. However, to save the party, our players must collect the mini snowmen from Olaf without getting buzzed. By doing so, they ensure Anna’s birthday party goes off perfectly and without a hitch.

Frozen Operation is from Hasbro Gaming and requires two AA batteries to run. The batteries are not included, so you need to purchase them separately. To start the game, put the batteries on the game board, just remember to put in the snowmen first before you put in the batteries.

How to Play Frozen Operation?

Frozen Operation includes a gameboard, 12 plastic snowmen, and tweezers. Before starting the game, put the snowmen inside Olaf then put the batteries. Now, take the tweezers and place them somewhere other players can access them without getting buzzed.

Each player takes a turn to select a snowman using the tweezers and attempts to remove it from the game board. While doing so, the player must avoid touching the metal sides.

If a player successfully removes a snowman without setting off the buzzer, they keep it. It’s now the next player’s turn to pick a snowman. If they successfully pick one, they get to keep it and another player takes the tweezers and attempts to do the same.

When a player is unsuccessful in removing a snowman, he should drop it back into the gameboard and their turn is over. The game ends when all of the little snowmen are removed and the player with the most snowmen wins!

Like the classic Operation, the gameplay requires a little finesse. For kids 6 years and under, it can be quite frustrating as they do not have the dexterity. As such, we recommend cooperative rather than competitive play. This way, kids can still enjoy the game whilst avoiding the feeling of frustration when they drop the snowmen or get buzzed.

What Age Is Operation Game For?

Frozen Operation is for ages 6 years and up. You can play the game as a solo player allowing you to practise removing the snowmen without setting off the buzzer. Alternatively, you can make it exciting by playing with two or more friends.

Whilst the game is advertised as “6 years and up” we think it would probably be safer to put “8 and up” if playing unsupervised. The reasons being the dexterity needed and concentration/encouragement that can be thrown in from an adult.

Also this version of Operation! is significantly more difficult due to the shape of the little snowmen. The original game is far easier on certain removals but on the other hand this game is a little more consistent. 6 year olds can still play, but it might be worth bending the rules a little for the younger players to encourage them to try again upon an unsuccessful pull.

What Batteries Does Operation Take?

Frozen Operation is a great game for kids who are fans of Frozen and its fan favourite characters such as Olaf. Like the original, this version requires lots of finesse to remove the snowmen from the gameboard without setting off the buzzer.

As we have said before, kids can play solo and practice removing the snowmen (encouraged for the more competitive children). This gives kids a headstart which comes in handy when they choose to play with friends. Frozen Operation is a win-win for families as the game teaches kids social strategies, hand-eye coordination, and much more importantly to slow down, take their time and play with patience!

Well, what are you waiting for? Get Frozen Operation today and help save Anna’s birthday party!