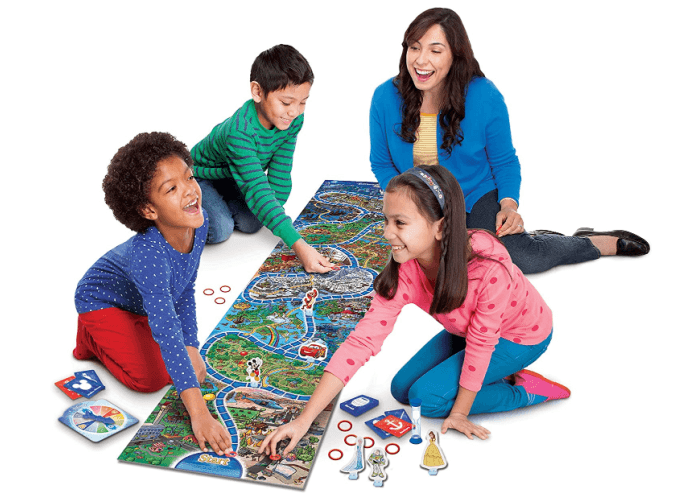 Bring the family together and test your Disney villains, songs, TV shows and movies knowledge with Disney Games for all ages. Inspired by Disney’s classic movies, TV shows and songs, the games are super interactive and fun. Whether you’re under 10 or 18+, these games will keep you entertained for hours.

Keep reading to find out the best Disney Games for all ages. 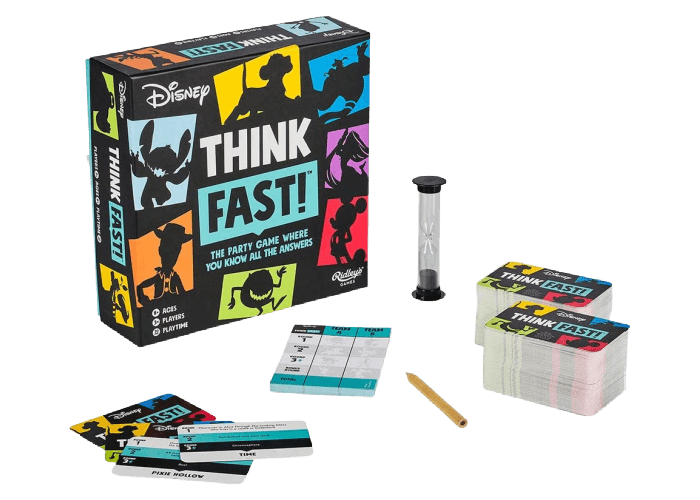 Go head to head with other teams as you play Think Fast Disney Edition. Suitable for 3 or more players, the game contains 240 Disney-themed question cards, a pencil, a score pad and instructions. As the perfect party game for Disney fans, teams usually go head to head in 3 rounds

In each round, teams have 30 seconds to answer specially crafted Disney related questions. Basically, players need to think and answer fast even as the questions get harder until you’re only given one word. So, you need to think fast if you want to win.

The game contains 240 question cards, a sand timer, a pencil, a score pad and instructions. Suitable for ages 8+, the game tests your Disney and Pixar facts. So, before playing, get your Pixar and Disney facts ready to solve questions. 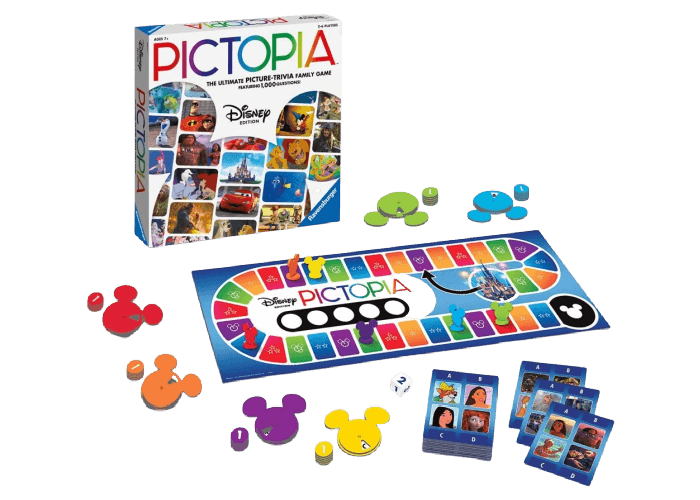 Disney Pictopia is a game of teamwork and contains 200 cards, 6 answer dials, 30 wager dials, a game board, 6 movers, a die and instructions. The game has more than 1,000 questions ranging from basic trivia to voting.

During the game, players have a chance to flex and show off their World of Disney knowledge starting with Classic Disney films all the way to Disney XD shows. To play, place the game board in the play area and then set the cards in a stack with the four pictures facing up.

Each player will pick a mover and place it in the start space on the game board then they will pick their matching answer dial and wager coins. Every player will then choose a wager coin to play on each question and then work individually or together to answer the questions. The player(s) at the castle space wins the game. 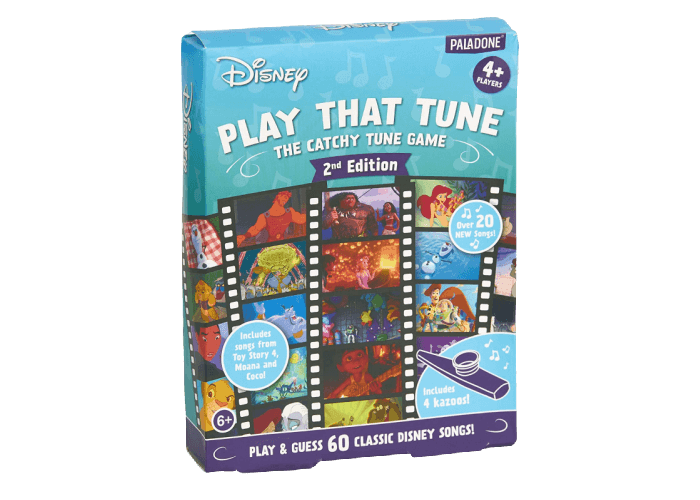 The game has 60 Disney classic songs of varying difficulty. Players have the opportunity to play the tune on the kazoo while other players attempt to guess the song. Fun for all ages, the winner of the game is the team with the greatest knowledge of Disney songs, especially the classic ones. It’s a Whole New World of fun! 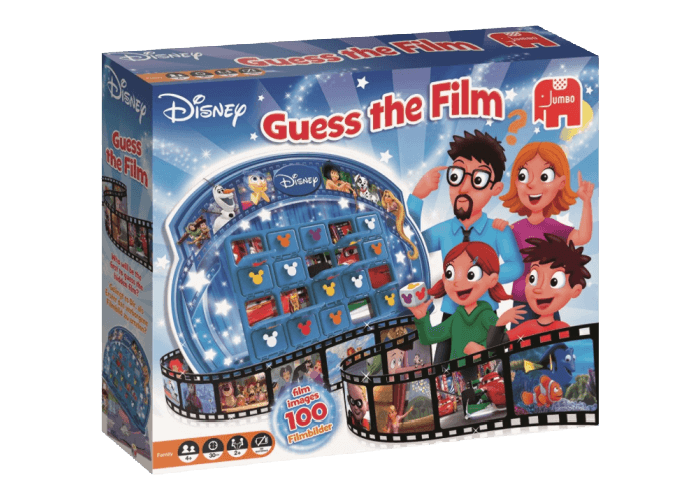 Can you guess your favourite Disney movies from five clues? The Disney Guess The Film Game tests your knowledge of Disney’s memorable live-action and animated films. From Mary Poppins to Aladdin, the game contains 50 sheets with 100 Disney film images, a film stand with a decorative frame, 20 Mickey tokens and dice.

Players take turns rolling the dice and then open a window with the corresponding colour to the die. The window will reveal part of an image from one of Disney’s films then it’s up to you to guess the name of the film. The player who gets the most correct answers wins the game. Also, the player who earns 4 Mickey tokens wins. 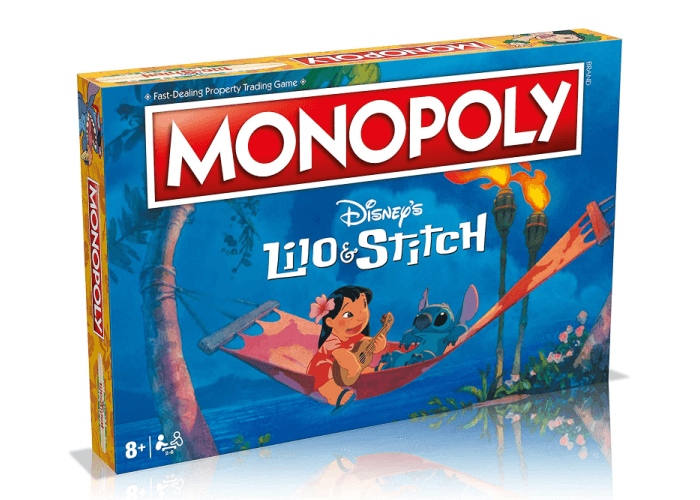 5. Lilo and Stitch Monopoly Board

Lilo and Stitch are one of Disney’s most popular animated TV series. Today, you can grab your Lilo and Stitch tokens and tour your favourite sites on a game board. Along the way, you’ll accumulate fortunes by investing in bespoke hotels and homes. All this and more is available on the Lilo and Stitch Monopoly Board game.

The game takes you on a hilarious Hawaiian adventure where you can buy, sell or even trade your favourite characters from Lilo and Stitch. Fun for the whole family, the game contains a custom game board, a deck of 60 cards, a pack of custom money, 6 custom tokens, 2 dice, 12 hotels, and 32 houses. While the game allows you to reap rewards, watch out for bankruptcy, jail or taxes. Always a stalwart choice for a board game, this Disney twist on the classsic game makes it that much more fun! 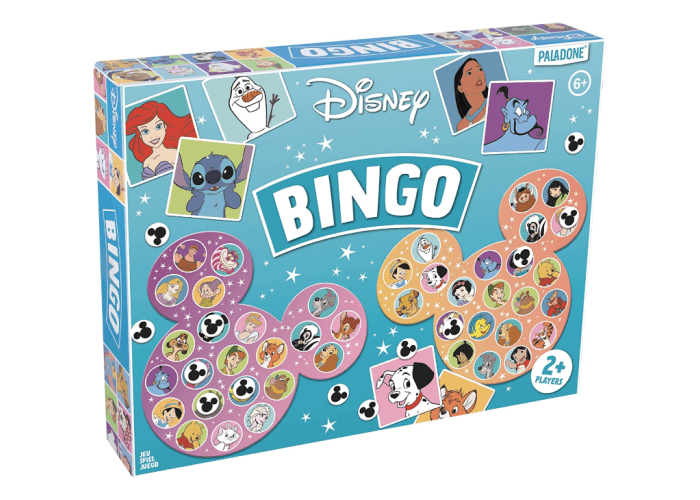 Bring everyone in your family together and play Paladone Disney Bingo. The game contains 6 bingo cards featuring some of Disney’s popular characters. These cards are in the shape of the most popular Disney character – Mickey. It also comes with 50 character cards for players to draw, and 60 tokens to track a player’s progress and instructions.

Designed to bring a magical twist to bingo, players need to collect the Disney characters and fill up the Mickey Mouse Bingo board. The first player to fill the board wins. Ideal for true Disney fans, the game is a great gift for boys and girls. You can gift family and friends on birthdays, holidays and other special occasions. This is definitely a game for the family board game nights!

Take the role of a Disney villain in Disney Villainous Bigger and Badder and achieve your devious goals. Players have the choice of the following Disney villains:

To achieve victory, your villain must defeat your opponents. For example, Lotso must trap four heroes including Buzz Lightyear in the Caterpillar room. To win, players must explore their villain’s abilities and discover how they can achieve their story-based objectives.

Ideal for Disney fans, this is the perfect board game for any game night occasion. It comes with easy-to-understand instructions that will inspire you with tips and strategies to craft a winning plan. This one is a deeper dive in to the board gaming world but it keeps it light and fun with Disney characters. A superb choice for the adventurous. 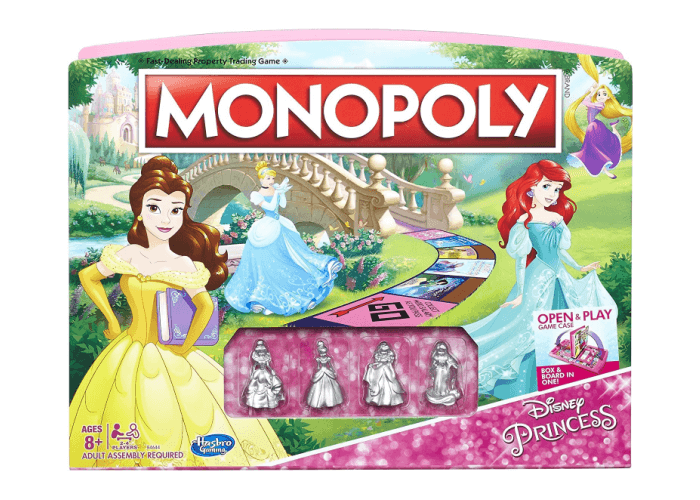 Play as your favourite Disney Princess in Monopoly Disney Princess Edition. Like the classic Monopoly game, players choose a character but in this game, you play as an adventurous Disney Princess. You can choose Disney princesses such as Belle, Cinderella and Ariel.

Once you choose your character, build up their magical kingdom by buying properties as you travel around the game board. Players have the choice of buying property spaces such as:

The winner of the game is the player who owns the most properties. In case of a tie, the player with the most money takes the crown. I mean, who doesn’t want to build their very own Disney Kingdom?! 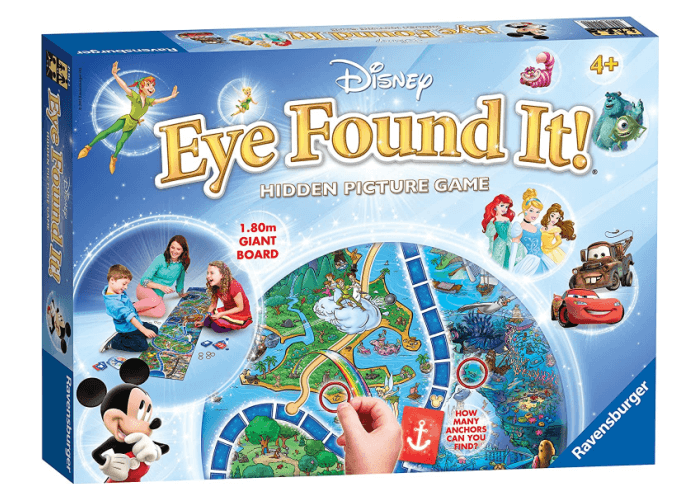 Join Mickey and friends on Disney Eye Found It as they undertake a magical journey. The game takes you through 12 different Disney realms. They include:

Along the way, players will search for hidden treasures. There are more than 1,000 things to find and the more treasures you find, the further along the game board you move. Just remember to reach Cinderella’s castle before the hands of the clock reach midnight.

Disney Eye Found It contains a 3-piece game board that fits together to create a 6-foot board. Simple to play, the game also contains a:

If all the players arrive at the castle before the clock strikes midnight, everyone wins. A fantastic choice for board game night with children since everyone can win! 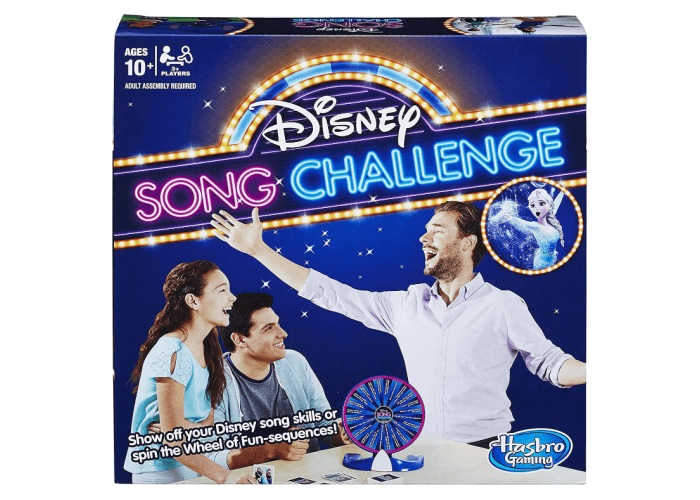 Want to show off your Disney song skills and prove you’re the champion? Well, Disney Song Challenge is a game where players spin the wheel and sing songs from Disney TV shows and movies. Designed for 3 or more players, the game tests a player’s knowledge of Disney songs.

One of the players acts as the judge while the rest have to be the quickest to jump up and sing a song from a Disney movie or TV show. Players must first flip a card from the deck revealing a Disney TV show or movie song. The first player to sing the song wins the card.

However, if the player fumbles and messes up the song, they must spin the Wheel of Fun and then perform a silly action. The fun sequences are Disney themed and the first player to earn five cards wins. This game is absolutely best played with the more enthusiastic Disney fans who can critique your performances! The more silly consequences you see the more fun you have!