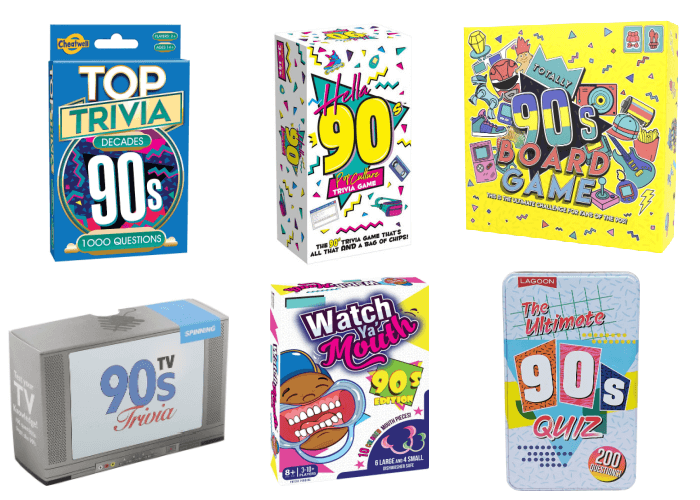 Do you miss the ’90s? We do too!  It had some of the best TV shows, music and movies that we can remember… That’s why we’ve gotten together a list of the best ’90s-themed board games to help you relive those glory days.

From classics like Hella 90’s to favourites like The Ultimate 90’s Quiz, there’s something for everyone on this list. So bust out your best ’90s gear and get ready to have some fun.

These ’90s-themed board games are sure to take you back to simpler times. 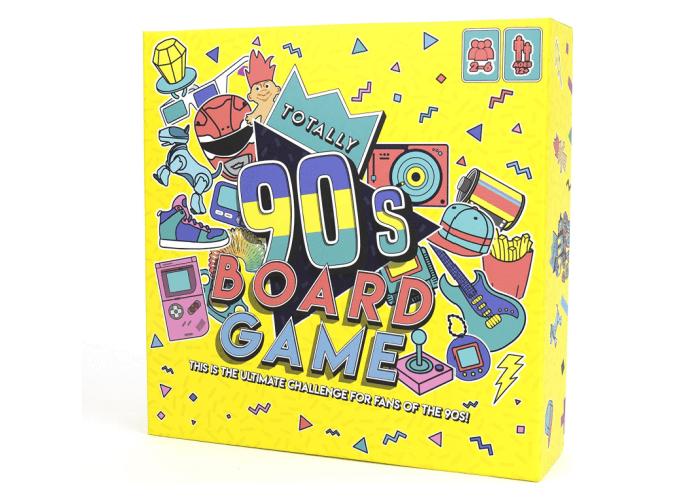 Well this is a story all about this, 90’s themed board game that starts our list! I’d like to take a minute so just sit right there and I’ll tell you all about how this game is one of the best out there!

If you’re looking for a fun and nostalgic way to spend an evening with friends or family, then look no further than the Totally 90’s Family Board Game. This board game tests you on everything ’90s from Fresh Prince of Bel-Air to Tamagotchis and Furby’s, and it’s sure to take you back big time.

The game is designed for four to six players, preferably aged 12 and above (well… probably about 30 so you actually LIVED in the 90’s), and it’s a great way to relive the 90s with friends or family.

To play the game, each player will choose a character card, which will determine their starting place on the board. The board is divided into 5 different categories, each of which is filled with 90s memorabilia.

Players will move around the board, collecting 90s items and answering trivia questions about the decade. The first player to collect all of their 90s items and make it to the final room wins the game. 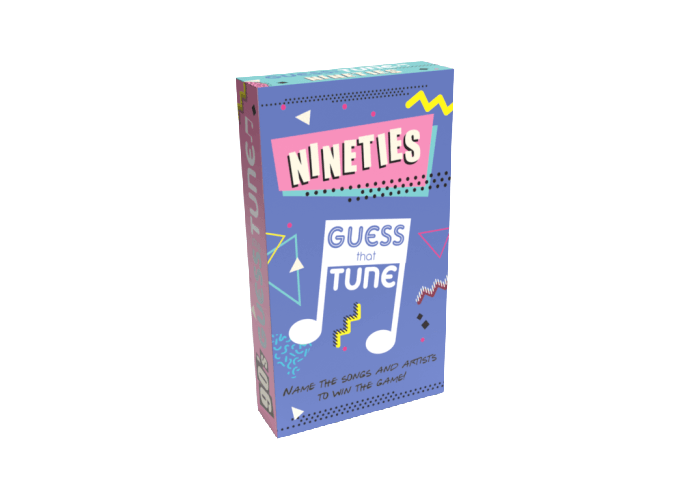 Who doesn’t love a good board game? And what’s better than a board game themed around the 90s like Guess That Tune?

Guess That Tune is a great game for 90’s kids (and adults!) who grew up listening to popular music. The game is simple – one player rolls a dice and guess what the song on the card is. The player who guesses the most songs correctly earns the most points and wins the game!

There are over 150 songs to decipher, meaning you and your fellow players will sure an extended, fun-filled experience trying to show who is top of the ’90s pop. This game is also great for a Christmas gift, especially for 90’s music fans. This one is absolutely a front runner in my opinon! 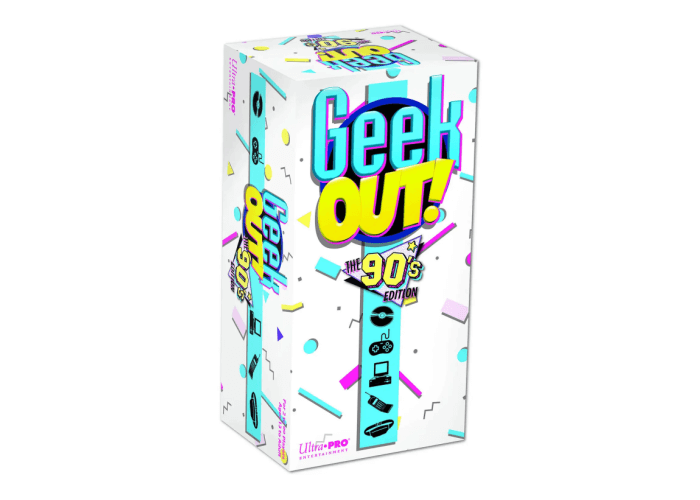 Geek Out! 90’s Edition is the perfect game for anyone who loves the 90s geeky pop culture. This fast paced board game comes with 70 cards, each with 90’s pop culture trivia to really relive the glory days!

Players take turns drawing cards and answering questions about their favourite 90’s TV shows, movies, music, and more. The player with the most correct answers at the end of the 30 minutes of playing time wins!

Geek Out! 90’s Edition is the perfect way to relive the 90s with friends and family. So get ready to Geek Out! The game is recommended for players aged 13 and above for content rating purposes. The ideal number of players for this game is 4 but you can play as a duo. 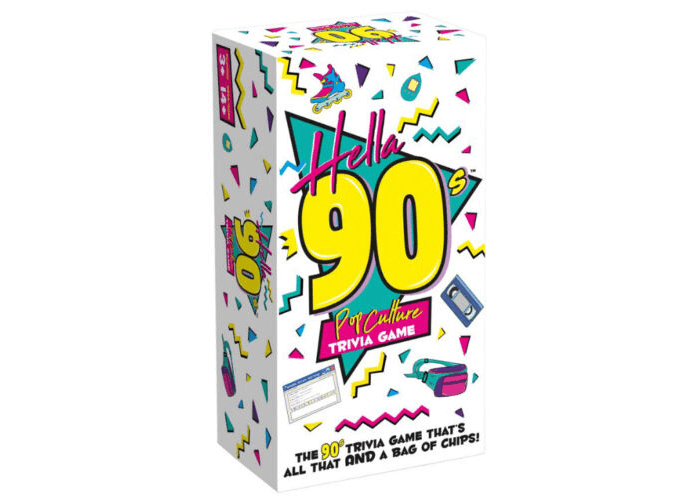 Hella 90’s is the perfect game for any 90’s kid who grew up playing classic board games like Monopoly and Life. This game takes all the best elements of those classics and brings them into the 90s with a fresh and modern twist.

The game is set up like a traditional board game but with a ’90s twist. Players start the game by choosing cards from the 200 available and answering the questions on each card. A 30-second timer sets the limit for your quick fire trivia.

The questions are all about the 90s and can range in categories from fashion, TV to movies. Hella 90’s is a perfect flashback of the ’90s, with a lot of twists, challenges and favourite tunes. You can listen to all the complimentary soundtracks of the game on Spotify. 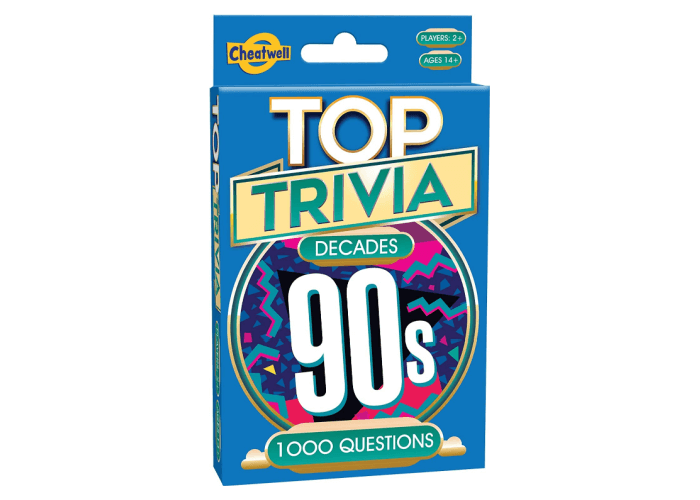 One of the best things about the ’90s was the board games, and there was one game that ruled them all: Trivial Pursuit!

If you are a lover of classics such as Cool Britannia, X-Files, Father Ted etc., Trivial Pursuit is the perfect way to show off your knowledge and rule the board game night.

The game is ideal for 2 or more players aged 14 and above. Due to safety ratings, the game is not suitable for kids below 3 years old but the questions and culture of the game pushes it more towards the 8+. Just make sure all the players have 90’s knowledge! 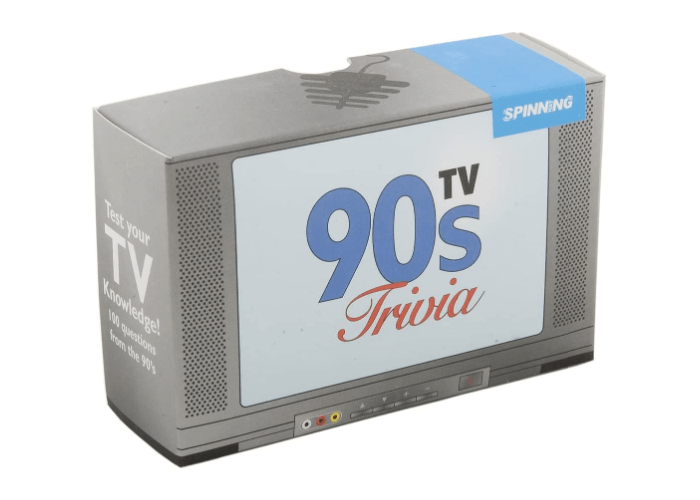 Another favourite 90s-themed board game is the TV Trivia Game. This game is perfect for anyone who loves 90s television, as it tests your knowledge of classic shows like Friends, Sex and The City, and The Simpsons.

The game is simple: answer trivia questions on most of the 100 trivia cards correctly and move your piece around the board. The first player to reach the finish line wins! A simple game but a whole lot of fun. The concept is basic enough but it really shines when it pushes the nostalgia whilst you play.

So if you’re looking for a fun and nostalgic way to spend an evening with friends, bust out the TV Trivia Game and enjoy a trip down memory lane. 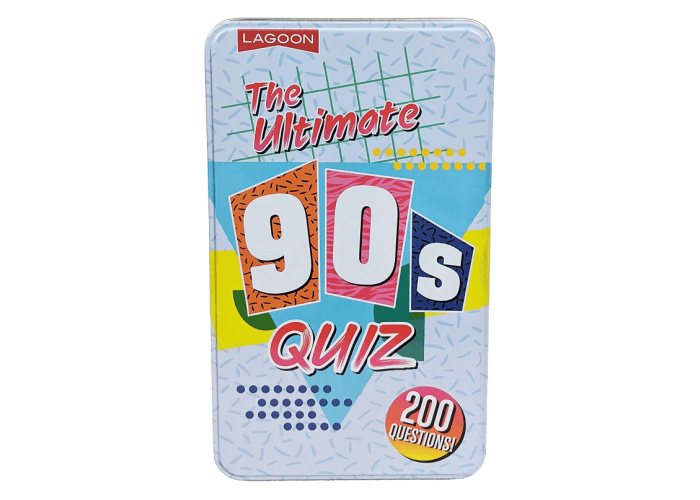 The Ultimate 90’s Quiz is a board game that tests your knowledge of all things the ’90s. From music to movies to fashion, this game covers it all. The game has over 200 questions ranging from pop culture to technology that promise an entertaining and nostalgic experience.

Whether you lived through the 90s or you’re just a fan of the decade, this game is sure to give you a challenge. This family game is perfect for 2+ players and is recommended for ages 8 and above.

So gather your friends, break out the snacks, and prepare for a nostalgic party game. 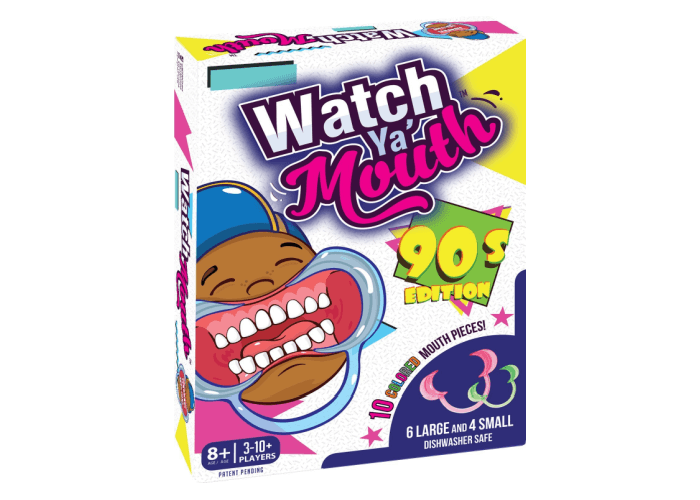 As mentioned earlier, the ’90s was a golden age for board games, and there are plenty of ’90s-themed games that will take you back to your childhood. Another favourite is the WATCH Ya Mouth 90’S Edition Party Card Game.

This award-winning party game is much like the classic card games but with a ’90s twist. Instead of regular cards, you’ll be using ’90s slang cards. And instead of playing by the rules, you’ll be trying to vulcanize your opponents with your sick ’90s lingo.

WATCH Ya Mouth is ideal for 3-10 players aged 8 and above.